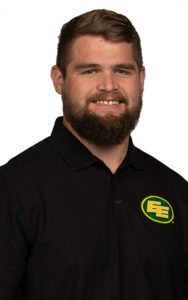 Travis Brown enters his first season with the Green and Gold.

He had a two-year CFL career as a linebacker for the Ottawa RedBlacks (2014 – 15), recording 56 tackles, three quarterback sacks, two interceptions and a forced fumble in 17 games.

Brown attended Fresno State from 2009-12 and was named to the All-Mountain West and All-Mountain Team in 2012.