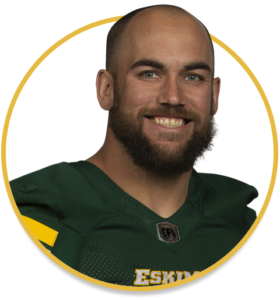 2018: King has appeared in all 18 games this season and has four special teams tackles. King is also the club’s long snapper.

2017: In five games, King finished with one tackle. King also had one kickoff for 52 yards.

2014: In 18 games, King recorded nine special teams tackles and one forced fumble. He also played in the West Semi-Final against Saskatchewan and the West Final against Calgary.

2012: In 15 games, King recorded seven special teams tackles. He recovered a fumble off a bobbled punt return against Saskatchewan on October 13. He was injured in that game and placed on the 9-game injured list for remainder of the season.

Personal: King was born in Edmonton and grew up in Sherwood Park. He played for Bev Facey High School from 2001 to 2003. He followed up as an All-Canadian linebacker for the Edmonton Wildcats Junior Football Club from 2004 to 2007. In 2007, he recorded 169 defensive tackles, earning him CJFL Linebacker of the Year and CJFL Defensive Player of the Year. He is the older brother of former Eskimos DB Neil King.