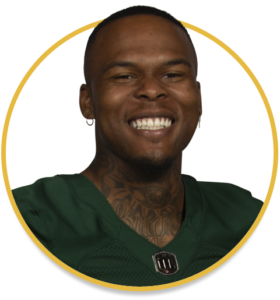 2019: In 16 games (16 starts), Collins Jr. finished with 73 receptions for 1,004 yards and three touchdowns. He finished with three 100-yard receiving games and ninth in the CFL in receiving yards. Collins was named a CFL Player of the Week in Week 2. He also finished with four total tackles. In the East Semi-Final, Collins Jr. caught six passes for 117 yards and in the Final, he caught one pass for 10 yards.

2018: (BC) Collins Jr. appeared in 17 games for the Lions where he caught 60 passes for 611 yards and two touchdowns. In the East Semi-Final, he caught five passes for 95 yards.

2017: (Saskatchewan) Collins appeared in one game for the Roughriders.

2016: (Saskatchewan) Collins appeared in 14 games where he caught 48 passes for 720 yards and two touchdowns.

College: Collins attended Kilgore JC for two seasons before he transferred to Midwestern State University in 2012 where he played for one season before he transferred to Texas A&M-Commerce. He spent two seasons there where he caught 64 passes for 1,187 yards and 14 touchdowns. In 2014, he was named All-Lone Conference and D2Football.com All-American.