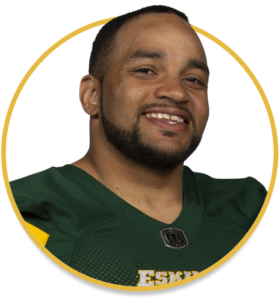 2019: In 15 games (15 starts), McCarty currently has rushed for eight yards and two touchdowns on three carries and 10 receptions for 39 yards.  He also has two special teams tackles. McCarty appeared in his 200th career game, all with the Eskimos, in Week 17 against the Hamilton Tiger-Cats. In the East Semi-Final, McCarty rushed one time for two yards and caught five passes for 34 yards and one touchdown. In the East Final, recorded one reception for eight yards.

2017: In 18 games, (18 starts), McCarty finished with for 56 rushing yards on 13 rushes and has 22 receptions for 143 yards and one touchdown in 18 games played as well as three special teams tackles. In the West Semi-Final, McCarty caught one pass for seven yards. McCarty also appeared in the West Final.

2016: In 11 games (11 starts) McCarty had 11 receptions for 79 yards, 15 rushes for 59 yards and two touchdowns. He also added three special teams tackles. Went on the 6-game injured list in Week 13. Activated to the active roster for the Eastern Final against Ottawa.

2015: In 12 games (12 starts), McCarty had one carry for 20 yards, nine receptions for 68 yards, five special teams tackles and one kick return for 17 yards. He also had a forced fumble in Week 4 against Ottawa. Went on the 6-game injured list in Week 12. Returned to the active roster in Week 18. McCarty played in the West Final and had one special teams tackle. In the Grey Cup, McCarty rushed once for three yards on a fake punt.


2012:  In 12 games, McCarty recorded 12 rushes for 36 yards with one touchdown and five receptions out of the backfield for 23 yards. He also recorded four tackles on special teams. McCarty left the Labour Day Rematch early and was subsequently placed on the injured list. He returned for the final game of the season and the East Semi-Final.

2010:  In 15 games (six starts), McCarty recorded 62 carries for 287 yards with three touchdowns and 36 catches for 278 yards with two touchdowns. He also had eight special teams tackles and one kick return for five yards. In Week 6, he caught a pass from punter Noel Prefontaine on a fake punt for a first down. In Weeks 8-9, he was placed on the 1-game injured list with a hand injury.  McCarty was the Eskimos Most Outstanding Canadian.

2008: In 18 games (three starts), McCarty recorded 88 rushes with four touchdowns, hauled in 70 catches for 583 yards with one touchdown and 11 special teams tackles. He filled in when starting running back AJ Harris was injured on September 13 and earned CFL Canadian Player of the Week honours.  McCarty got his first CFL start on October  4 against Winnipeg and again earned Top Canadian honours.

2007: In 18 games during his rookie season, McCarty recorded six carries for 13 yards, hauled in seven catches for 99 yards with one touchdown and recorded five special teams tackles.

College: McCarty started the first seven games at Western Washington in 2006 before suffering a season-ending foot fracture. The Muskogee, OK native was a second-team North Central Conference All-Star and was ranked fifth among NCC rushing leaders with 492 yards and five touchdowns on 130 carries. He also caught 30 passes for 278 yards. He began his college career at Boise State before transferring to Reedley College (California) and finally to Western Washington.

Personal: McCarty lettered in both football and basketball. Growing up he also played baseball. He represented Canada in the 2001 Big League World Series where the team placed third.