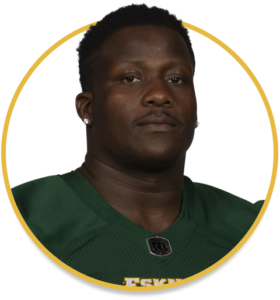 2019: In 18 games (17 starts), Sewell finished with 35 defensive tackles, one special teams tackle and eight quarterback sacks. Sewell was named a West Division All-Star. He also had one forced fumble and one fumble recovery. He also dressed for both the East Semi-Final and Final.

2018: In 18 games (18 starts), Sewell finished with 38 defensive tackles, seven quarterback sacks and one reception for 16 yards.

2013: In 15 games, Sewell recorded 39 defensive tackles, eight sacks, one pass knockdown and one fumble recovery. In Week 16 against Saskatchewan, he recorded two kickoff returns for 24 yards. Sewell was named to the West Division All-Star Team and earned his first career CFL All-Star nod.

2011: In three games, Sewell recorded one defensive tackle. He was placed on the 1-game injured list for Week 5 before being released.

College: In four seasons (2007- 10) with the Akron Zips, Sewell registered 223 tackles. He was the second player in school history to be named a three-time All-Mid-American Conference honouree.