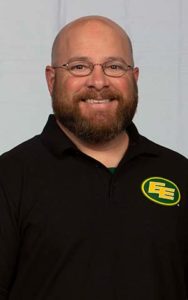 Turner joins the Eskimos after spending the 2017 and 2018 seasons as the BLESTO scout for the NFL’s Carolina Panthers, and brings with him 10 seasons of NFL experience to the Green and Gold. Most recently, Turner owned and operated a consulting service, helping NFL Draft prospects prepare for the Combine and pre-draft interview process since 2015.

Turner worked in the personnel department of the Arena Football League’s Arizona Rattlers from 2011-15, serving as director of player personnel in his first three seasons with the team before being elevated to assistant general manager. The Rattlers won three consecutive AFL championships from 2012-14.

Prior to joining the Rattlers, he spent two seasons (2010-11) as the director of player personnel for the UFL’s Hartford Colonials.

From 2005-10, he worked in the personnel department for the Oakland Raiders, holding several different positions, including scouting assistant, area scout and assistant director of pro personnel. Turner also spent time with the San Francisco 49ers in 2011 as a personnel consultant. Turner began his career in football as an intern with the Miami Dolphins (2001) and New York Giants (2003-04).

Turner graduated from San Francisco State with a degree in political science.