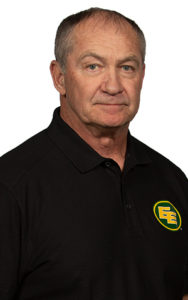 Lolley joins the Eskimos coaching staff for the second time (2014-2015 linebackers coach) as their new defensive coordinator. He brings with him more than 40 years of experience which includes 14 years at Auburn in various roles as well as being the Defensive Coordinator/Defensive Run Game Coordinator/Linebackers Coach with the Hamilton Tiger-Cats during the 2017 season. He was also a linebackers coach with the Saskatchewan Roughriders in 2016.