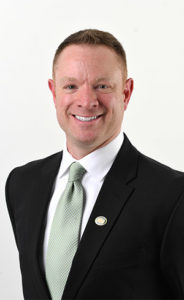 Entering his fourth season as the general manager & vice president of football operations, Brock Sunderland has helped guide the Green and Gold to one West Final (2017) and one East Final (2019). Prior to joining the Eskimos, Sunderland spent four seasons as assistant general manager for the Ottawa RedBlacks. His term includes two division final victories and back-to-back Grey Cup appearances, winning the championship in 2016 – after just three seasons as an expansion team. Sunderland’s role included contract negotiations, assisting with salary cap management and overseeing the scouting department.

The native of Great Falls, Montana entered the CFL in 2004 as a scout with the Montreal Alouettes where he quickly advanced to Director of Scouting.

In the 2017 season, Sunderland’s first with the Green and Gold, the club finished with a 12 – 6 record finishing in third place in the West Division. The Eskimos defeated the Winnipeg Blue Bombers in the West Semi-Final but fell short against the Calgary Stampeders in the West Final.

Now entering his 15th season in pro football, Sunderland spent six seasons (2007-12) with NFL’s New York Jets in various scouting capacities. The team made back-to-back appearances in the AFC championship during his time with the team (2009, 2010).

Sunderland is a former wide receiver and punt returner for the University of Montana (1998-2000). After appearing in three conference championships, he entered the coaching ranks a student assistant coach at his alma mater.