Ryan King added the final chapter to his story-book career on Tuesday, announcing his retirement after eight seasons in the Canadian Football League.

“I want to first thank the Edmonton Football Club for having the trust and support in me over the past eight seasons,” said King. “I am forever grateful the memories and time we shared together.”

King was originally drafted by his home town team in the 5th round (38th overall) in the 2012 CFL Draft after playing junior football for the Edmonton Wildcats and University football at Saint Mary’s University. He finished his CFL career playing 122 games, all for the EE Football Team, recording 36 special teams tackles alongside his long-snapping duties. The crowning moment in his career came in 2015 when he was able to hoist the 103rd Grey Cup for the team he grew up watching. 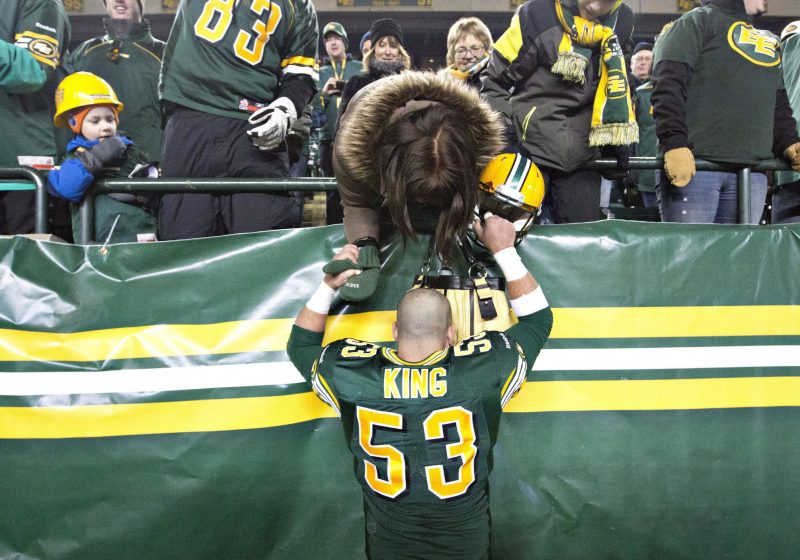 It’s a rarity in modern day sports to be able to play for your hometown team, but it was an accomplishment that King did not take for granted. His contributions to the team extended far beyond what he was able to accomplish on the field.

“Part of being a long snapper is flying under the radar. If everything is going right, you never notice them, and it is a responsibility that King has always accepted. His best performances for the Green and Gold usually came with the least fanfare, as he was a fixture in the EE Football Team’s community endeavours.

“Ryan King is easily one of the best people I’ve had the privilege to be around in football and in life. His impact in the locker-room, on the field, and in the community is second to none,” GM/VP Brock Sunderland said about King. “We wish him all the best in his future and have no doubt he’ll provide the same character, leadership, and devotion he gave to this team for 9 years to wherever he goes next.”

King made countless community appearances over his eight seasons with the team. King has visited Ukraine and Kuwait to meet with Canadian Armed Forces, organized football camps with former teammate Calvin McCarty, spoke on anti-bullying measures through TELUSWise, spoke out on gender-based violence with the VOICE program, and partnered with Kids Sport to bring children to football games.

King was also a prominent figure in the team’s Northern Outreach programs, visiting both Inuvik and Tuktoyaktuk in the Northwest Territories. 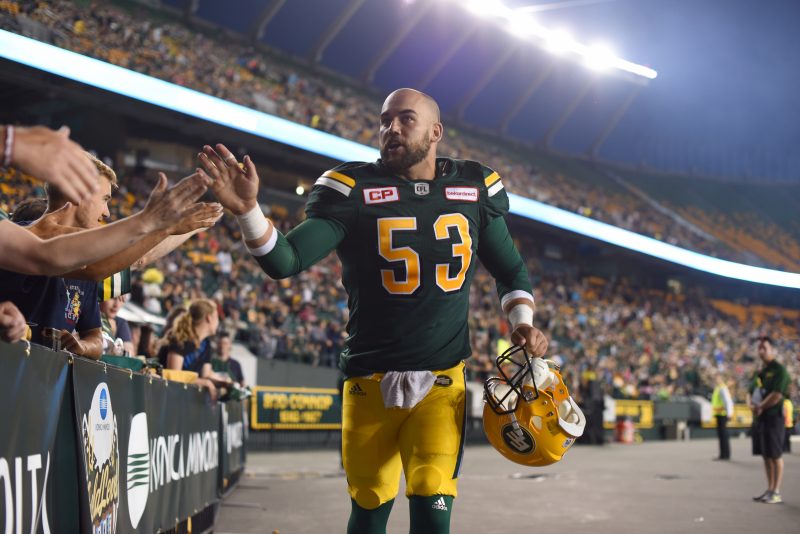 His work off the field has been acknowledged by his peers – King has been a CFLPA player representative for years – as well as the team and the league. King was team’s 2018 David Boone Award winner, he was a two-time Jake Gaudaur Veterans Award nominee, and he won the 2018 Tom Pate Award (The CFL Award for sportsmanship and community work).

King is an Edmontonian through and through. He grew up playing in the shadow of The Brick Field at Commonwealth Stadium and became a man under its lights. He lived his childhood dream and made the city and the organization better through his actions both on and off the field.