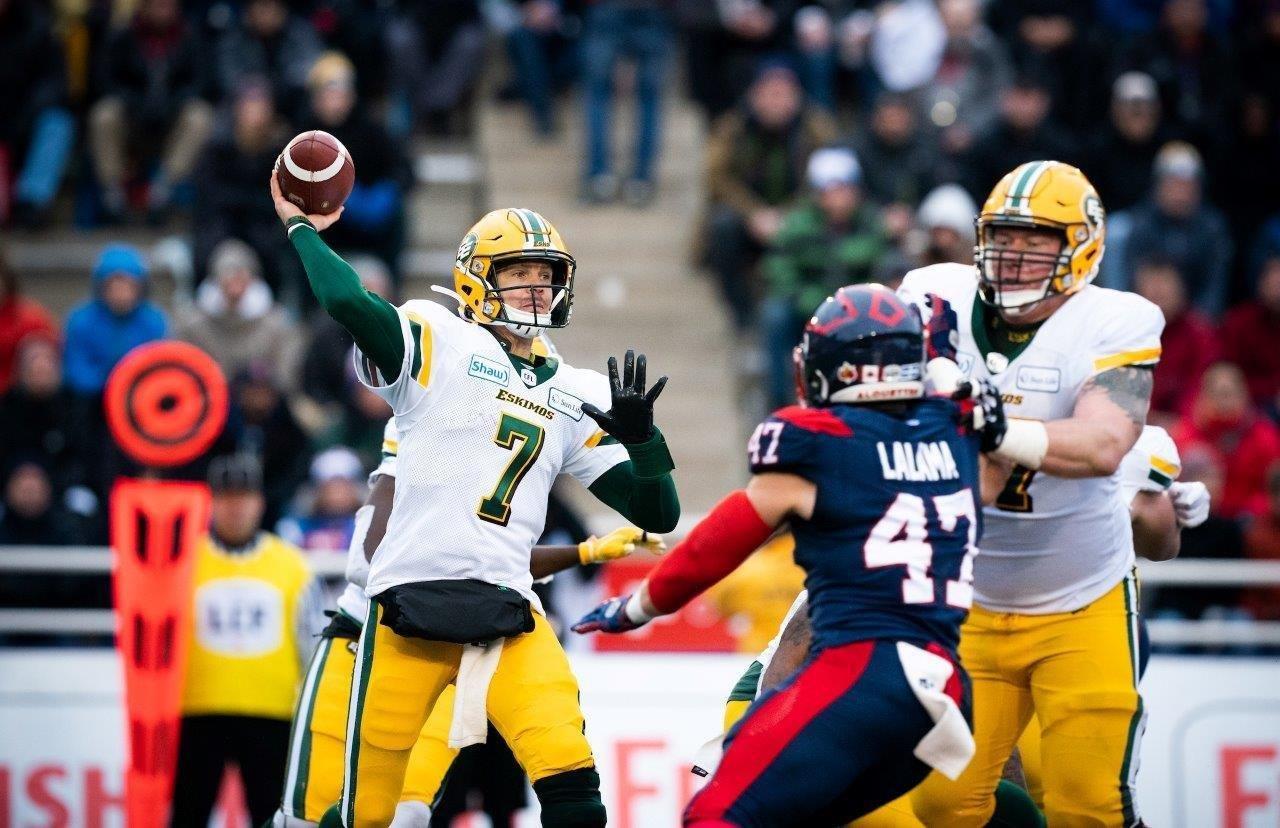 Watching quarterback Trevor Harris put on a magic show Sunday afternoon was a lot more enjoyable as a teammate for Eskimos defensive back Josh Johnson than it was a year ago.

Harris completed each of his first 22 passes – setting a CFL playoff record – and finished the East Division Semifinal against the Montreal Alouettes with a playoff-record 92.3 completion percentage (36 of his 39 passes were caught).

“He was lights out,” Head Coach Jason Maas said about Harris’s performance, which helped the Eskimos defeat the Alouettes 37-29 in front of 21,054 spectators at Montreal’s Percival Molson Stadium. “It was much needed and great to see.”

With the win, the Eskimos advance to the East Division Final against the Hamilton Tiger-Cats, who posted a league-leading 15-3 record this year, at Tim Hortons Field at 11 a.m. Sunday, Nov. 17.

“He’s always liable to go 40-for-40 if you let him,” Johnson said about Harris, who was playing only his second game since an injury to his throwing arm forced him to make an early exit from the Labour Day Rematch game on Sept. 7. “I played him in the (East Division Final) last year to go to the Grey Cup, and he had three incomplete passes (and threw) for about 500, 600 yards on us.

“I know he’s capable of doing it,” Johnson added. “Man, he showcased it tonight. He’s one of the best quarterbacks in this league.”

Johnson was playing with the Ticats last year when Harris completed 29 of 32 passes (90.6%) for 367 yards, and a CFL-record six touchdown passes as the Ottawa RedBlacks advanced to the Grey Cup at The Brick Field at Commonwealth Stadium.

The 29-year-old defensive back also played a key role for the Eskimos on Sunday with his first career three-interception outing. Two of the picks came in the final 109 seconds as the Esks held off the Alouettes, who had already rallied for four come-from-behind victories in the fourth quarter with elusive quarterback Vernon Adams, Jr., this season.

All three of Johnson’s interceptions came in Edmonton’s half of the field. His first one at 8:23 of the third quarter was at the Eskimos 46-yard line and led to a 35-yard Sean Whyte field goal, the second of five he kicked in the game.

With time running out and Edmonton protecting a slim five-point lead, Johnson picked off an Adams pass at the Esks 44 and returned it 29 yards to the Montreal 37 to set up another Whyte field goal, this time from 36 yards to gain a more comfortable eight-point advantage with 62 seconds to play.

Johnson, a four-year CFL veteran in his first season with the Eskimos, completed his trifecta by jumping in front of Montreal receiver Eugene Lewis at the Edmonton 35-yard line with 43 seconds remaining to seal the deal.

Harris used the next three plays to run out the clock.

“For our defence to be able to finish out a game for us, it was tremendous,” said Maas.

The Green and Gold are the West Division’s most successful crossover team, having won three of four visits to the East Semifinal since 2008. However, the Esks are winless in two appearances in the East Final while none of the previous 11 West Division crossover teams have ever advanced to the Grey Cup.

“Why not us?” asked Maas. “That’s our motto. This is our first step of three. The first one is done. On to the next.”

The Eskimos dominated the time of possession against the Alouettes with 36 minutes and 13 seconds of ball control as Harris assembled lengthy drive after lengthy drive in the first half of Sunday’s game with his pin-point passing.

The 33-year-old veteran QB completed his first five passes as the Eskimos marched 88 yards on only seven plays to open the scoring with a two-yard touchdown run by running back CJ Gable at 4:01 of the first quarter. Two possessions later, he was six-for-six passing during a nine-play, 80-yard march capped by Gable’s three-yard TD push through a pile of bodies near the goal line as the Esks took a 15-7 lead at the 6:21 mark of the second quarter.

At that point, Harris had completed 13 passes in a row to eight different receivers.

On their next series after a 99-yard kickoff-return touchdown by Montreal, the Eskimos assembled an 11-play, 83-yard drive to take control of the game 22-13.

Harris lofted a pass to fullback Calvin McCarty in the back corner of the end zone for the TD and his 20th straight completion.

For McCarty, who recently turned 35, it was only the second playoff TD of his career and first on a reception.

“He just makes plays, man,” Maas said about McCarty, who had five catches for 34 yards plus a two-yard run during Sunday’s game. “We know Calvin’s more than capable of carrying the ball, catching the ball out of the backfield. We’ve always said he’s got the best hands on our team. I don’t think that’s debatable. He’s right up there with anybody.

“Thirteen years into his career, we appreciate him,” Maas added. “It’s great to see him catch that ball in the back of the end zone. It kind of sparked us right there.

“Obviously, he’s great at the protection for punting and, honestly, any block you have him do, and he can do.”

Harris, though, was the Eskimos offensive star, passing for 421 yards (his fourth 400-yard game of the season) and keeping Edmonton in the lead from start to finish despite a wild second quarter that saw the teams combine for 36 points, including five touchdowns (three by Montreal) and a 43-yard Whyte field goal on the final play of the first half.

“We’re just happy that we’re starting to click and, obviously, we want to make sure that we take it the next level and start hitting some big plays and really driving the dagger in the other team,” Harris said. “I feel like I’m in a good head space in terms of seeing the defence and in terms of feeling the timing of this offence.”

Maas pointed out that Harris “prepares like no one else” and “can make all the throws you need to make.”

“If we can give our quarterback time to throw it – the way he studies, the way he looks at the game play, the way he understands defences – you feel like if our offensive line can do what they’ve done all year, which is protect him, he’s always going to find success,” Maas said.

While the Eskimos still moved the ball up and down the field in the second half, they weren’t as efficient finishing off drives during the last two quarters. Whyte’s other field goals from 25 and 17 yards helped maintain Edmonton’s lead, but the Alouettes were always within striking distance.

“We were able to do some good things against their scheme,” said Harris. “That’s a good defence. They did a good job all season of keeping other teams out of the end zone and stalling drives. Even though they gave up a decent completion percentage, they were able to get off the field and force turnovers. That’s why they were in the position they were in – hosting a playoff game.

“But we were able to execute and stay on the field and put together some scoring drives, and it ended up paying off towards the end,” he continued. “Our defence was rested from not staying on the field so long, and then they made some good plays in the end.

“Obviously a couple of plays I wish I had back and, late in the game, you wish you could finish the game with some first downs and imposing our will. But (Montreal) did a good job of getting us off the field and our defence came through.”