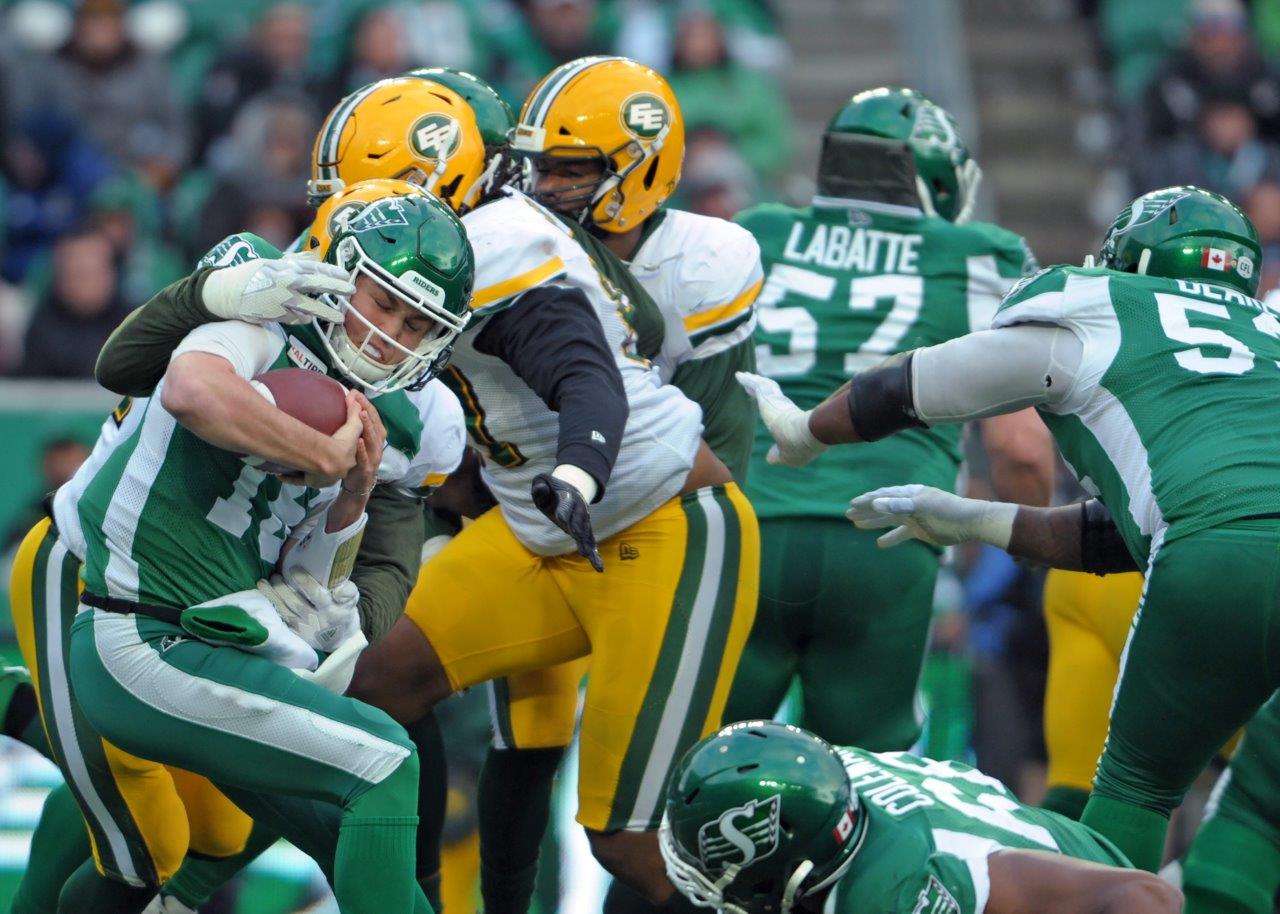 The final standings will show the Eskimos with their first losing record (8-10) since 2013, but it’s of little consequence to the Green and Gold right now.

The Eskimos had been locked into a fourth-place finish in the West Division and a berth in the East Division Semifinal at 11 a.m. Sunday, Nov, 10, against the Alouettes in Montreal for more than three weeks.

Saturday’s regular-season finale was all about putting their best effort forward with a lineup that was missing starting quarterback (Trevor Harris), two leading receivers (Greg Ellingson and Ricky Collins, Jr.) and top running back (C.J. Gable).

The Eskimos, who also sat out star middle linebacker Larry Dean and exchanged some defensive starters and backups throughout the CFL game, scored two third-quarter touchdowns to take a 13-12 lead, but eventually fell 23-13 to the Roughriders.

The Roughriders’ Brett Lauther had 29,156 spectators sitting on pins and needles at Regina’s Mosaic Stadium as he missed four consecutive field goal attempts of 47, 50, 54 and 32 yards before kicking a game-winning field goal against the Eskimos for the second week in a row.

With the victory, Saskatchewan, 13-5, captured first place in the West Division for the first time since 2009.

Lauther’s winning kick came from 12 yards after an eight-play, 66-yard drive that included a roughing the passer penalty against weak-side linebacker Don Unamba, who leapt to block a potential pass and simply fell on top of Saskatchewan rookie quarterback Isaac Harker, who was already falling to the ground.

Roughriders linebacker Cameron Judge completed the scoring 40 seconds later with a 29-yard interception-return touchdown off rookie QB Troy Williams, who played the final three series in the fourth quarter, completing one of three passes for 15 yards.

The Eskimos defence was led by rookie Vontae Diggs, who made nine defensive tackles in his first start at middle linebacker (he also had a special teams tackle). The Esks held Saskatchewan’s offence in check for most of the second half while Edmonton’s offence provided a few moments of excitement.

Early in the third quarter, quarterback Logan Kilgore threw to wide receiver DaVaris Daniels, who in turn tossed his first CFL pass 40 yards downfield to fellow wide receiver Tevaun Smith for a 45-yard gain. Smith, a rookie, then hauled in a 14-yard strike from Kilgore on the next play for his team-leading sixth TD catch of the season.

The Eskimos were also marching down the field on their next possession when Kilgore lost a fumble on a strip-sack, but later recovered a Roughriders fumble and capped a 45-yard drive on three plays and a rushing the passer penalty with a seven-yard toss in the corner of the end zone to Kevin Elliott, who was playing only his second game of the season.

Sean Whyte’s first convert attempt was blocked, but he made his second kick to give the Esks a 13-12 lead and tie Dave Cutler (1981) for 13th place on the Eskimos single-season scoring list with 175 points.