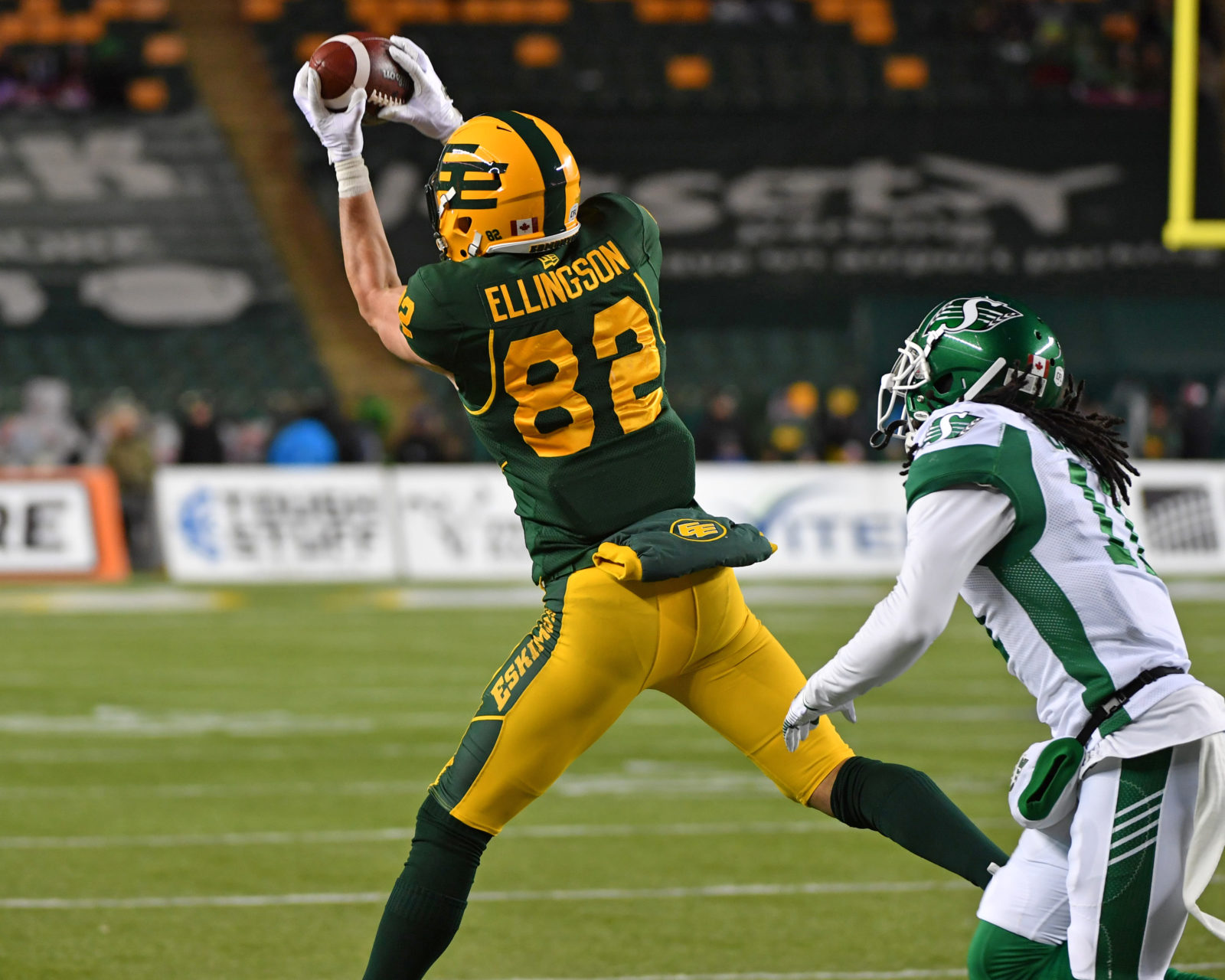 Playing for the first time in seven weeks because of an injury to his throwing arm, Harris marched the Eskimos offence 75 yards on 11 plays to even the score with 1:48 remaining in the CFL game.

“Frustrating that we didn’t get to finish that one off,” Harris said after Brett Lauther kicked a 43-yard walk-off field goal to lift the visiting Saskatchewan Roughriders to a 27-24 victory in front of 29,228 witnesses on a chilly evening at The Brick Field at Commonwealth Stadium.

“I really felt like we were starting to get into a rhythm there,” Harris continued about the offence’s performance in the fourth quarter. “I felt really good about what we were doing and how we were attacking them. If we got the ball back, I know we would have scored.

“Unfortunately, we just didn’t the chance, but credit to them. (The Roughriders) did a great job and they put together a nice drive at the end.”

Saskatchewan had to start that final drive at its six-yard line after taking a holding penalty on the Eskimos’ final kickoff. The Riders converted two second-and-10 situations into first downs and completed five out of seven passes for 70 yards within the span of 103 seconds to get into field goal range.

With the victory, the Roughriders take over sole possession of first place in the West Division with a 12-5 record. They can clinch top spot in the West for the first time since 2009 with another win over Edmonton – or a Calgary Stampeders loss to the BC Lions – when the teams wrap up regular-season play next weekend.

The Eskimos, 8-9, will be trying to finish the regular season with a 9-9 record for the second year in a row and avoid their first losing season since 2013 when they take on the Riders in the second half of the home-and-home series at 2 p.m. Saturday at Mosaic Stadium in Regina.

“We’re going to get together (Sunday), watch some (game) film and get better for next week,” said defensive tackle Mike Moore, who took over the team lead with his ninth quarterback sack of the season in the third quarter.

“The way we played today, I don’t think anything needs to really be changed,” said rookie wide receiver Tevaun Smith (seven catches for 92 yards). “We’ve just got to finish. It’s really a game of inches. There’s a few plays we wish we could have got back, but that’s football.”

Fullback Calvin McCarty, the Eskimos’ 34-year-old, 13-year veteran, gave Edmonton a 14-0 lead in the first quarter with a pair of one-yard touchdown runs. It was the first time McCarty has scored a TD since 2017 and his first rushing major since ‘16.

The Esks held a 17-7 advantage at halftime, but the Roughriders rallied with two touchdowns in the third quarter to take a 21-17 lead.

“It was a great football game,” Eskimos Head Coach Jason Maas said. “Tip your hats to Saskatchewan. They had everything in the world to play for (first place) and they grinded out that win.

“They just made plays,” he continued. “They’re more than capable of that. They’ve got a great offence. They have a quarterback (Cody Fajardo) who will stand in there and deliver under duress. They do a good job up front (on the offensive line).

“We put our (defensive backfield) guys in some man-to-man situations, and they won some of those battles,” Maas said. “… Even on that last drive, we did a few different coverages, mixed some things up, and they had an answer.

“Ultimately, when you win 12 games in a season, you’re going to win games like that, and they’ve been able to do that all season. They’re a great football team, and we took them down to the wire. A couple of plays here or there and it’s a different story, but it wasn’t our night tonight.”

Even though the Eskimos already know they’ll be playing the Montreal Alouettes in the East Division semifinal on Nov. 10, they were hoping to start building some momentum for the playoffs while also closing out their home schedule with a victory Saturday.

The loss dropped the Eskimos’ record at The Brick Field at Commonwealth Stadium to 5-4 this season, but McCarty believes Edmonton took some steps towards where they want to be for the playoffs.

“We battled,” he pointed out. “We had a red-zone turnover (interception in the corner of the end zone on the Esks’ first possession). We missed a kick (Sean Whyte’s 46-yard field goal attempt early in the fourth quarter after having tied his club-record streak of 25 successful kicks in a row earlier in the game). We left some points out there on the field.

“Obviously, you want to be playing your best ball at this time of the season, and you want to win the games, but at the same time, we can take a lot of positives from that,” McCarty said. “We know where we’re going (to the East Division semifinal in Montreal), and we’ve got another week before we need to do what we’ve got to do.”

Harris also thinks the Eskimos are moving in the right direction.

“If we can start getting into a rhythm, we’re going to be a tough out,” he said, already looking forward to the rematch with the Riders. “I forced two balls tonight and paid for both of them (with interceptions). Unfortunately, that’s how it goes.

“But I thought I saw (the field) pretty well. I thought my arm responded well. I wasn’t sure how it was going to hold up, but it ended up being good. It felt pretty good, and it felt like I was in a good rhythm there at the end of the game. I just wish we could have got the ball back.”

“We were better in the red zone,” said Harris, who threw a 12-yard touchdown pass to Tevaun Smith to lift the Eskimos into a 24-24 tie late in the game. “We’ve made some strides.

“It took me a minute to kind of feel my rhythm on a couple of different things. I wanted to make sure that I was seeing (the field) well and make sure I’m putting the guys in the best position I can for them to make themselves successful.”

Smith was wide-open at the goal line when he caught the ball and only had to take a short step to score his fifth touchdown of the year.

“It was good to get into the end zone, and there’s no controversy whether I caught it or not,” Smith said, referring to recent reports that a CFL official claimed the league made a mistake allowing Smith’s TD catch at the back of the end zone against the Ottawa RedBlacks on Sept. 28. “I was wide open. That was good. I was excited to get in there and help my team get close to winning this game.

“Definitely, it gives us confidence going into the next few weeks.”

Ricky Collins, Jr., enjoyed his best outing in 10 games since a 148-yard outburst on Aug. 3 against the Stampeders in Calgary by catching five passes for 99 yards, including a 65-yard pass-and-run effort on the Eskimos’ first offensive play of the game.

Greg Ellingson chipped in seven catches for a tough 76 yards, including a key 14-yard reception on third-and-four with three minutes remaining in the game to extend Edmonton’s final touchdown drive. The big receiver seemed to take a big shot from the Riders every time he hauled in a pass.

“It felt good to see him out there slinging the rock and doing what Trev does,” McCarty said about Harris. “I’m excited for us moving forward and ready to keep it going.”

Maas also thought Harris did a good job of “calling the offence and running it efficiently, making throws, making reads, doing the things that we expect out of him. He looked good early. Honestly, you take a couple of plays back, and I thought he had a great night.” 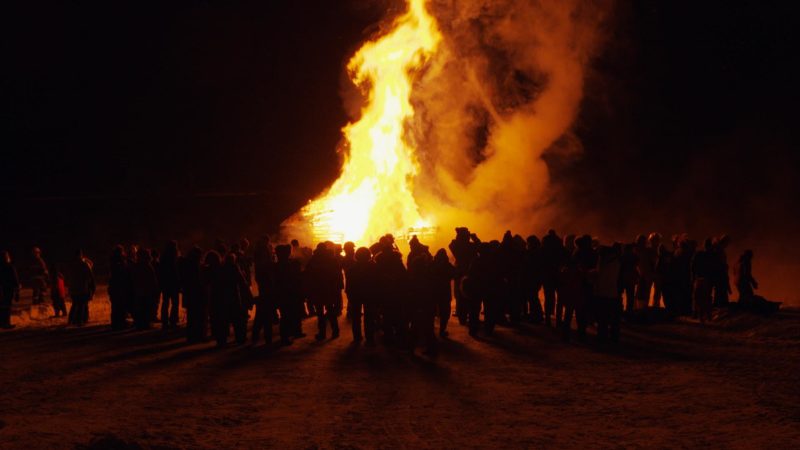