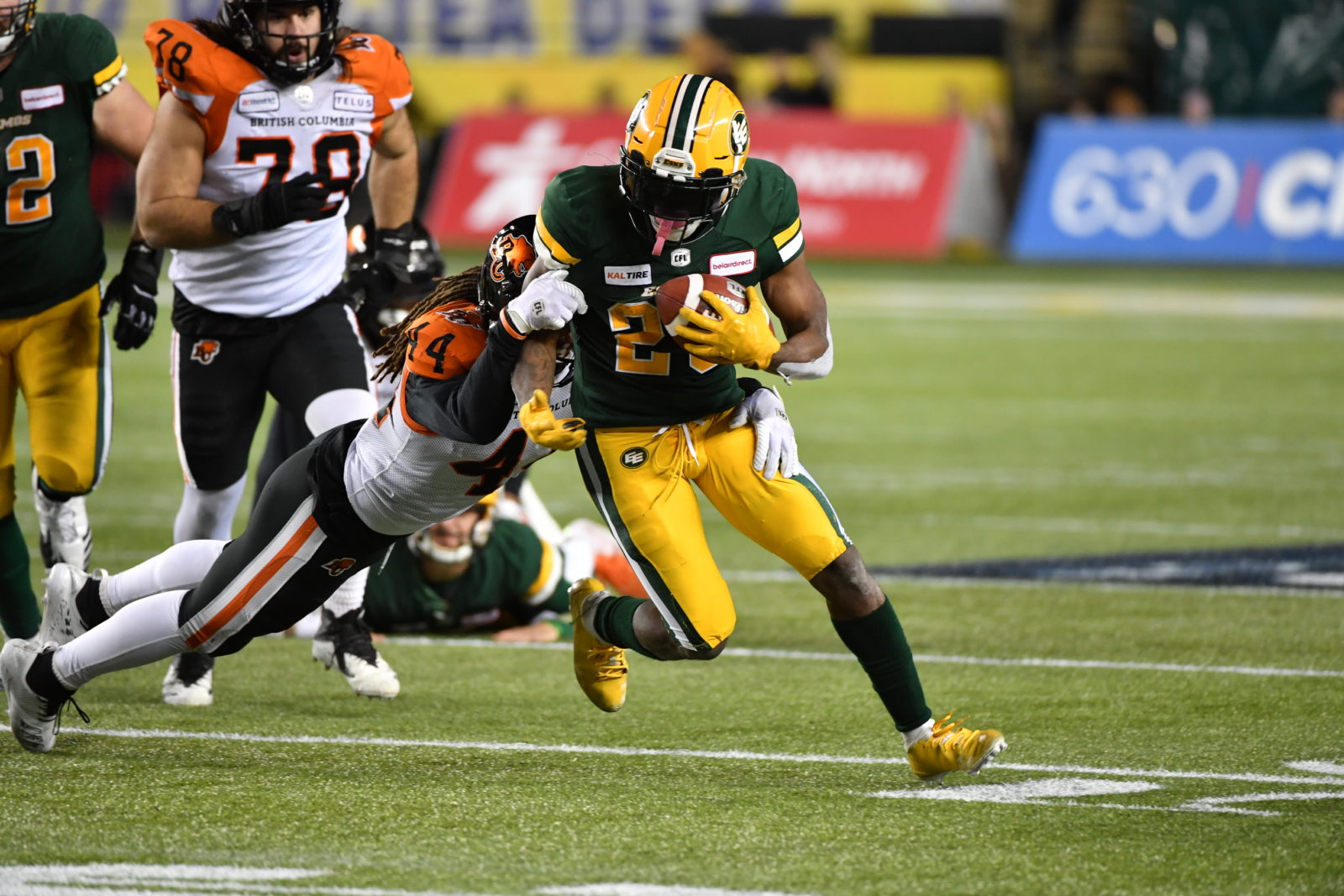 Maas asked his players to pay whatever price was required to make a play in order to win the CFL game against the BC Lions at The Brick Field at Commonwealth Stadium.

“Just make sure that you give it your all so we can punch our (playoff) ticket,” receiver Greg Ellingson said about the coach’s main message.

The Eskimos followed Kilgore’s painful example early in the game to a T as they eliminated BC, 5-11, from the playoffs with a 19-6 victory over the Lions while also clinching a playoff berth for themselves in front of 27, 218 spectators.

“It was an opportunity to make the playoffs,” explained defensive end Kwaku Boateng. “It wasn’t pretty at some points, but ultimately, a (win) is a (win), and we’ve just got to work hard and keep pushing.”

“It’s about being healthy now and playing better football.”

The Eskimos, 8-8, have their final bye week coming up and then finish the regular season with back-to-back games against the Saskatchewan Roughriders, 10-5.

“Tough competitor, man,” Maas said about Kilgore (18 of 29 passing for 194 yards plus a 14-yard run). “He took a lick on the first series of the game. He has part of his tongue missing right now. … He had a bloody mouth the whole game.

“When your quarterback is willing to lay it all on the line like that, it’s awesome to see because you’re not going to win every game in big-scoring games. You’re going to win some tight games, and you’ve got to be tough mentally and physically to do that. Logan is as tough as they come.”

Kilgore was struck under the chin by BC defensive lineman Odell Willis’s helmet on the Eskimos’ sixth offensive play of their first series of the game.

“It got my neck a good bit, and I bit my tongue pretty good,” Kilgore said. “It was a (solid) hit. It felt like it was to the head area.”

Willis was assessed a roughing the passer penalty, which moved the ball to the BC 12-yard line and the Eskimos eventually settled for a 22-yard field goal by Sean Whyte, his first of four three-point kicks in the game.

Kilgore was slow getting up and then walked around on the field with his helmet off for a few moments after the hit, but said there was “never a chance” of him coming out of the game.

“I told (Eskimos rookie backup quarterbacks) Jeremiah (Briscoe) and Scooter – that’s what we call Troy (Williams) – that unless you see me laying on the ground, just keep your butt on the sideline,” Kilgore said. “I’ll be all right.

“When I’m laying there, then get ready.”

As much as Kilgore was hurting after Willis’s high hit, BC quarterback Mike Reilly paid a more painful price halfway through the first quarter when he suffered a suspected broken wrist while getting crunched by Boateng after throwing a pass.

“Obviously, the intent is never to injure playing football,” said Boateng, who had one of the Esks’ four quarterback sacks in the game – but the only one by a defensive lineman – while also knocking down a pass in the offensive backfield.

“The intent is to enjoy yourself and make plays and compete. It’s unfortunate to see a competitor like Mike Reilly go down like that, but ultimately the team had to rebound, and we got to rebound and stay focused.”

Maas said it was hard to see his former quarterback get hurt. Reilly’s injury means all nine CFL teams have lost their starting quarterback at some point this season.

“It’s the toughest part about playing against someone like that who you care about,” Maas said. “We made it hard on him for the three games that he played against us this year. Coming into this game, he was as hot as anybody in the league so I knew it’d be a challenge. To see him go down early, you never feel good about that, but I know that’s just part of the game.”

The Eskimos, who have been without their own starting quarterback (Trevor Harris) for all but one quarter of the last five games, surrendered only one touchdown (none Saturday night) while sweeping the three-game series with the Lions, who haven’t won a game in Edmonton since July 13, 2013.

The Green and Gold took what turned out to be a commanding 16-3 lead at halftime by scoring 13 points in the second quarter on Whyte field goals of 49 and 44 yards and running back Shaquille Cooper’s two-yard touchdown run, which concluded an 11-play, 63-yard drive. Whyte also kicked the convert.

“Shaq did a good job stepping (into the lineup),” receiver Greg Ellingson said about the second-year running back, who replaced the injured CJ Gable for a second time this season. “Kyle (Saxelid, a 2019 second-round draft pick) at left tackle, too.”

Cooper finished the game with 94 rushing yards on 18 carries while also catching three passes for another 11 yards.

“We had to run the ball,” said Kilgore, who sold a fake to Willis as he scrambled away from the Lions’ D-lineman in the second quarter before throwing a 14-yard strike to Ellingson on second down. “We knew (the game) was going to be physical. We knew it was going to be chippy. You’re dealing with a team that’s got their whole season on the line.

“Quarterbacks get tied to wins and losses a lot,” Kilgore added. “At the end of the day, teams win games. Today, our defence played great. Our special teams played great. And, offensively, we played good enough to win.”

Ellingson had six catches for 133 yards to accomplish a 1,000-yard receiving season for the fifth consecutive year. Fellow receiver Ricky Collins, Jr. (four catches for 26 yards) also went over the 1,000-yard mark for the first time in his career.

But the star of this game was the Eskimos defence, which previously shut out the Toronto Argonauts 26-0, crushed the Lions 33-6 and limited the Ottawa RedBlacks to 12 and 16 points, respectively, in two games.

“Awesome. Phenomenal,” Maas said about his defence, which limited BC to 109 passing yards and 180 yards of net offence overall on Saturday. “They came to play all night. They were physical like we wanted. We talked about controlling the line of scrimmage and hitting people, and they did that tonight.

“(The BC) offence coming into this game was as hot as any offence in our league. To hold them to six points at the end of four quarters is a big deal.”

“It was drilled into us that we’re going to be blitzing this week,” said defensive nosetackle Almondo Sewell (two defensive tackles). “We realized they couldn’t pick up the blitzes as well as most teams can. We just kept blitzing. We got a couple of sacks, a couple of forced fumbles and, hey, we got a win.”

“Whenever it’s my time to blitz, I’m just going to make the play,” said Unamba.

As far as his teammates were concerned, Unamba said: “I feel like we did a good job of stopping the run for the most part. We made some tackles, and we made some sacks, we got an interception (cornerback Tyquwan Glass), so we played a good team defence today. It was a good all-around effort from our defence.”

Defensive back Forrest Hightower said the Eskimos “were having a lot of fun out there. The past couple of weeks (playing against the league-leading Hamilton Tiger-Cats twice within three weeks) has been a little rough on us, so we were happy and excited to get this win.”

With former Eskimos’ third-string pivot Danny O’Brien taking over after Reilly was injured, it created a re-enactment of Edmonton’s training camp battle for the backup QB’s job between Kilgore and O’Brien.

“A couple of people were saying, ‘It’s just like practice,’ ” said Glass (three defensive tackles and a pass knockdown). “We put a little bit more pressure on Danny because he was here, so we know him.”

Speaking of backup quarterbacks, Eskimos rookie Troy Williams (nine carries for 18 yards) took over the short-yardage situations Saturday with Kilgore being bothered enough by an ankle injury to miss the first day of practice last week.

“I took the last one,” Kilgore said. “I felt good doing it.”