Bazzie Doing Whatever Coaches Ask of Him for Team

Bazzie Doing Whatever Coaches Ask of Him for Team

Defensive end Alex Bazzie has been on a roller coaster ride since he joined the Eskimos last year.

He signed a two-year contract as a celebrated free agent on Feb. 13, 2018, and played all 18 games last season – making 39 defensive tackles and eight quarterback sacks while forcing a fumble and recovering a fumble – but the team still missed the playoffs.

“We talked to him coming out of training camp,” Head Coach Jason Maas said on the post-game show after last Saturday’s 21-16 victory over the Ottawa RedBlacks. “We knew he wasn’t going to start for us, but he’d be a reserve and be paid all year.”

“He stuck it out with us, and I appreciate him for doing that and the way he’s been,” Maas said. “He’s just fit in with the guys like he does but worked extremely hard every single week. Every time we’ve had to call on him this year, he’s done the job, and he’s only going to get better if we keep him in there because that’s very difficult to get thrown in and then taken back out and thrown back in.

“Bazzie is a true pro, and I’m very pleased with him, just the way he’s been and everything like that. He’s just so awesome.”

Why did the six-foot-one, 228-pound D-lineman from Silver Spring, Maryland, choose to stay in a situation that didn’t promise much, if any, playing time?

“I always believed that I have to finish what I started and I didn’t feel like I finished anything here in Edmonton,” Bazzie said during a phone conversation from Hamilton, where the Eskimos played the league-leading Tiger-Cats this past Friday. “So I wanted to stay and just ride out everything.

“To start training camp and start the beginning of the season with a team and then to move on at the beginning of the regular season to a different team, it wouldn’t have felt right, and it wouldn’t have sat right with me,” he explained. “That’s why I chose to stay because I’m a guy who finishes what I start. I also have a close relationship with my defensive line group and a lot of other teammates on the Eskimos team and in the organization.

“I felt it was best for my family and me just to continue what I had started in training camp, to be with the organization that I started with and just to see where it goes and let God deal with the rest.”

It didn’t go anywhere for the longest time. Bazzie spent the first three games on the injured list and then was a healthy scratch until finally getting a chance to play on special teams against the Calgary Stampeders and Ottawa RedBlacks in early August – he even appeared in a handful of plays at linebacker for the first time since high school. After that, Bazzie returned to the sidelines as a healthy scratch (for a total of seven times this year).

“It was hard,” he said about watching games from the sidelines. “It was frustrating. It was difficult. Sometimes it was awkward. It didn’t even feel right. I was confused. I was puzzled. All those words could describe how I felt.

“I just had to be strong. At the end of the day, I had to keep letting myself know that I could play football. I know that I’m good enough to be on this field. I was just waiting for my opportunity to shine. When it comes, I’m going to have to do what I’ve got to do to let the world know that I still have it.”

Bazzie finally got his chance to start a game against the Tiger-Cats on Sept. 20 at The Brick Field at Commonwealth Stadium, making four defensive tackles in the first half.

“It was a solid start,” he said. “Not really the Alex that I wanted to be on the field, but it was good to just be back out there and have everybody around me, being back with the boys and just trying to get back in my groove. It felt great. I took advantage of my opportunity.

“We fell short by three points (losing 30-27 to Hamilton), but our team rallied, we played hard, and it was just a great feeling to be out there with all the guys and going to war with them.”

Bazzie was stayed in the line-up in Ottawa, but at least he was still in uniform and could get in a few plays on defence while also playing on three of the four special teams – punt, kickoff and punt return.

He made two defensive tackles and three special teams tackles.

“Every time I went in (the game), I felt it was urgent for me to make a play,” he said. “I knew my opportunities were limited. There was no telling when I was going to get in. I knew I was playing special teams. I said, ’Hey, whenever I’m on this field, let me just try to help this team in the best way possible to make an impact play.’

“I woke up that day just excited and happy, and everything carried over into the game. I was so anxious. I was so ready. I had to keep telling myself all day ‘Just calm down, it’s not game time yet, calm down, calm your mind down.’

“Once it was time to let go, I just shot out of a cannon and got rolling. I wasn’t looking back. I was not stopping. It felt great.” 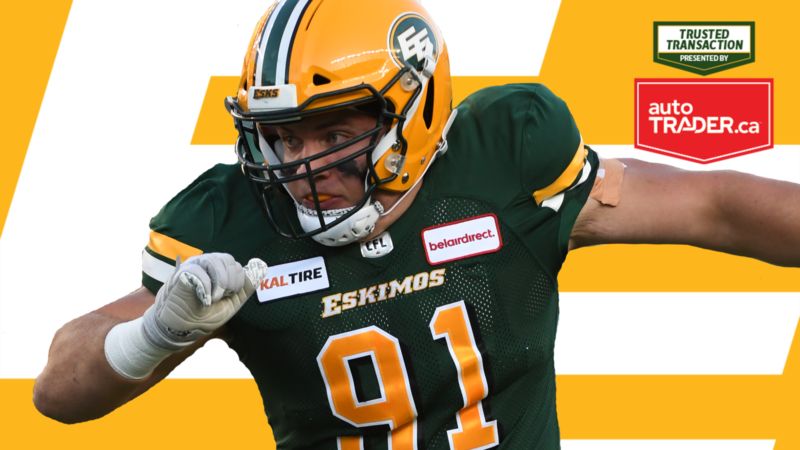