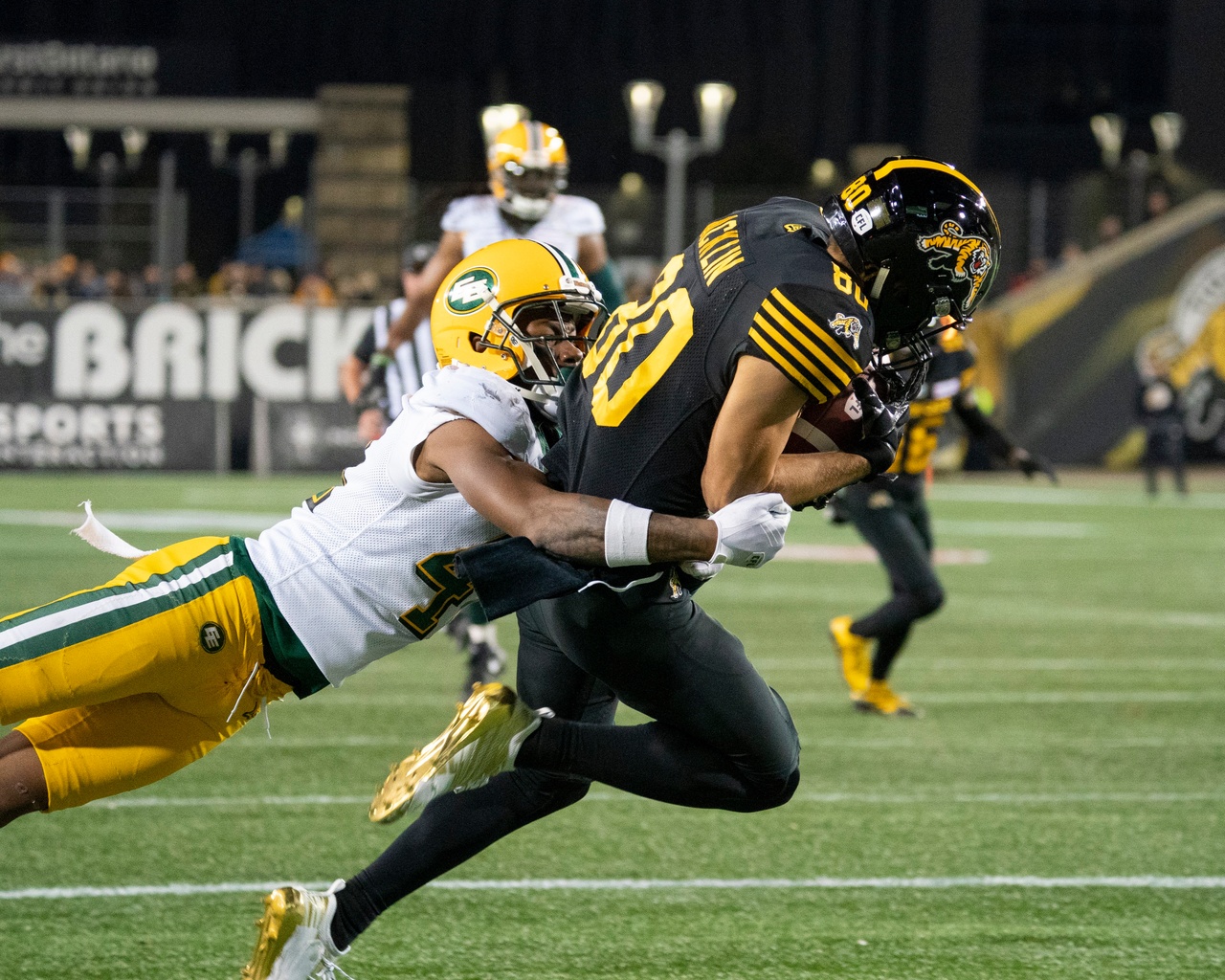 The Eskimos will have to wait to try to secure a CFL playoff berth.

A 42-12 loss to the Hamilton Tiger-Cats in front of 23,411 spectators at Tim Hortons Field on Friday night put the Eskimos’ playoff hopes on hold for another week.

Edmonton, 7-8, have to win just one of its final three regular-season games – or have the BC Lions (4-10), Toronto Argonauts (2-11) and Ottawa RedBlacks (3-11) all lose one more game – to qualify for the post-season. The Lions and Argos play each other on Saturday night while the RedBacks have a bye this week.

The Eskimos take on the Lions at 5 p.m. Saturday, Oct. 12th, at The Brick Field at Commonwealth Stadium.

An optimistic Eskimos team entered Friday’s game after having won the first game of the two-game East Division road trip 21-16 over the RedBlacks in Ottawa. Edmonton had also limited the league’s best team (Hamilton) to three field goals over the final three quarters when the teams played at The Brick Field at Commonwealth Stadium only two weeks ago. The Esks rallied from a 24-0 deficit to tie that game 24-24 and 27-27 before losing 30-27 on a walk-off field goal on the last play of the game.

But the Tiger-Cats, 12-3, proved to be a different animal on their home turf. The league’s only undefeated team at home this season (7-0) equalled a franchise record with their 12th victory of the season in their first home game in 32 days.

The Ticats also happen to be the CFL’s top-scoring team and the league’s second-stingiest for allowing points (the Calgary Stampeders have allowed eight fewer points, but also played two fewer games).

While the final score Friday ended up as the Eskimos’ most lopsided loss of the season, the Green and Gold got off to a much better start than they did when the Ticats scored three consecutive big-play touchdowns during the first quarter in Edmonton.

The Eskimos responded with an 11-play, 79-yard drive that stalled at the Hamilton two-yard line before Sean Whyte kicked a nine-yard field goal.

The score remained 8-3 in Hamilton’s favour at the end of the first quarter before the Tiger-Cats started to pull away in the second quarter with another touchdown (14-yard catch by Jaelon Acklin) and Lirim Hajrullahu’s first of four field goals (31, 24, 33 and 32 yards).

The Ticats recently added hard-nosed running back Tyrell Sutton to complement their attack of fleet receivers in an offence that relies upon misdirection plays. Sutton, a seven-year CFL veteran with the Montreal Alouettes and Lions, had three runs of 12 or 13 yards in the first half en route to an 88-yard outing (only 11 carries).

Eskimos quarterback Logan Kilgore completed 15 of 17 passes in the first 30 minutes, but only managed one first down each time they stepped on the field after the opening series in the first half.

Edmonton tried to rally from the 19-3 halftime deficit with a 10-play, 38-yard drive to start the third quarter. Whyte kicked a 31-yard field goal to extend his league-high field goal streak to 20 in a row – five short of his Eskimos club record set in 2017.

The Esks then sputtered with their first pair of two-and-out series while the Ticats kicked two more field goals to increase their lead to 25-6 by the end of the third quarter.

Kilgore (23 of 32 passing for 233 yards) assembled another 75-yard scoring drive (six plays) to kick off the fourth quarter, finally hitting slotback Natey Adjei with a nine-yard touchdown pass at the Hamilton goal line. A two-point convert attempt was unsuccessful, and the Eskimos trailed 25-12.

The rest of the game was pretty much all Tiger-Cats.

While 34-year-old, 13-year veteran fullback Calvin McCarty reached a significant milestone by playing in his 200th CFL game, the three Eskimos who were closing in on 1,000-yard seasons all fell short of the mark.

Running back CJ Gable rushed 11 times for 47 yards while catching four passes for 50 yards before he was sidelined with an injury in the third quarter. He is three yards away from becoming the first Eskimos player since Mike Pringle in 2003-04 to post back-to-back 1,000-yard rushing seasons.

Receivers Greg Ellingson (four catches for 40 yards), who was also injured late in the game, and Ricky Collins, Jr., (four catches for 53 yards) are also 39 yards and 22 yards, respectively, short of the milestone.

Rookie running back Alex Taylor had two carries for 31 yards, including a 28-yard scamper, while filling in for Gable to set up Adjei’s second touchdown of the season.

Defensively, middle linebacker Larry Dean and weak-side linebacker Vontae Diggs led the way with each player collecting six defensive tackles and a special teams tackle. Diggs also knocked down two passes at the line of scrimmage while blitzing the quarterback while Dean had one of Edmonton’s three quarterback sacks, his first of the season.

Defensive end Kwaku Boateng had the other two sacks, ending a four-game dry spell while also moving into a tie with defensive tackle Mike Moore for the team lead with eight.

Rookie quarterback Jeremiah Briscoe (0 for 2 passing) made his CFL debut in the final two minutes.