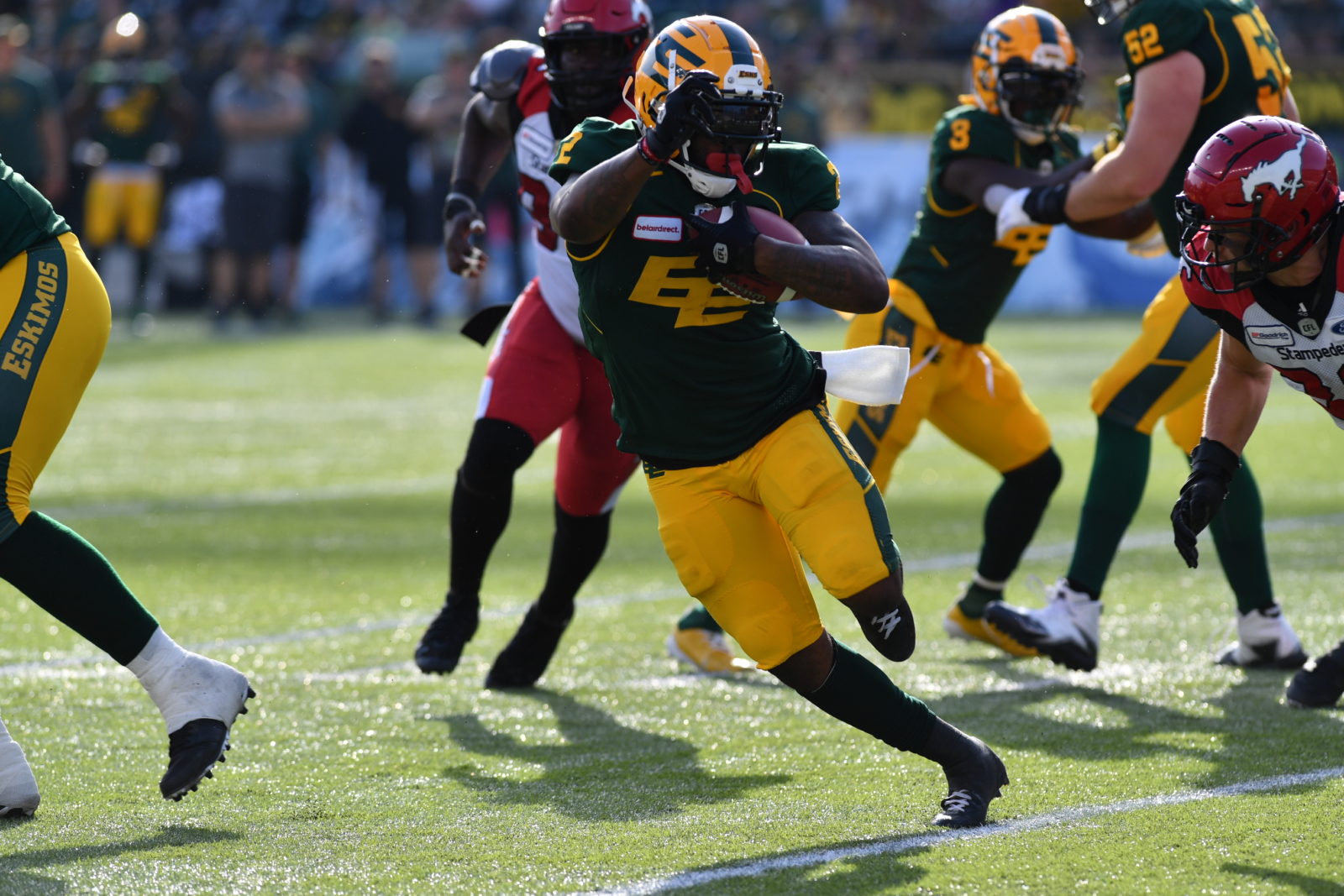 The bye week couldn’t have come at a better time for the Eskimos.

Tired and frustrated after getting swept in the annual Labour Day week home-and-home series with the Calgary Stampeders for the eighth time in the last 11 years, the Esks will have almost two weeks to regroup before playing the 9-2 Hamilton Tiger-Cats at The Brick Field at Commonwealth Stadium on Friday, Sept. 20.

“It’s been a long season so far,” strong-side (SAM) linebacker Don Unamba said after Saturday’s 33-17 home loss to the Stampeders in front of a season-high 40,113 spectators on CFL Family Day. “We’ve played a lot of games. We’re going to use the bye week to clear our minds, get our minds off football for a little bit and come refreshed for the second half of the season and get ready to make this (playoff) push.”

The Eskimos, 6-6 after three straight losses to the 9-3 Winnipeg Blue Bombers and 7-4 Stampeders, have fallen into fourth place in the West Division and may now be looking at a possible cross-over playoff berth into the East Division come November.

“For the players, I hope that they go home, they get rest and mentally re-charge and re-energize and get excited about coming back because the season is a grind,” said Edmonton Head Coach Jason Maas. “And then, when you’ve lost three straight, obviously, it wears on you a little bit more.

“Our guys have played for nine straight weeks. They deserve a break. They deserve some time off. As coaches, we won’t get any (time off). We’ll be focused on trying to fix this problem and work through some things and have the guys better prepared when they come back to play and win a ball game, because that’s what all our focus is on – winning the next one.”

Offensive lineman Matt O’Donnell, who has played left tackle for the last two games after missing six games with a leg injury, was able to briefly forget about yet another bitter loss to the provincial rival Stampeders by playing with some of the children who were running around on the field after the game.

“You kind of forget about the score when you see the smiles on their faces,” O’Donnell admitted. “They get so excited. I think, ‘It’s just a CFL player, like it’s not that big of a deal.’ But sometimes to them, it lights up their day and they have huge smiles and get all happy about it.”

O’Donnell is among a handful of Eskimos players who regularly return to the field after home games to have “meet and greet” opportunities with the young fans.

“The whole reason why we’re out here is because they’re coming to watch us play,” he said. “Without the fans, I’m sitting at home with a desk job or working with the RCMP. I try to give back as much as I can.

“When I was elementary school and high school, I went to CFL games across the country,” he explained. “There were always a couple of guys who came out to sign stuff and take photos. I just thought I’d carry it forward like they did.”

The Eskimos got off to a good start in Saturday’s game when Unamba picked off a Bo Levi Mitchell pass at the Calgary 52-yard line and returned the ball to the Stamps’ 24. Three plays later, quarterback Trevor Harris completed an eight-yard touchdown pass to rookie Tevaun Smith (his third of the season) to give the Green and Gold an early 7-0 lead.

“Yeah, it was good to get a good start, a good jump, get good momentum,” Smith said. “But we had to continue that throughout the whole game. At the end of the day, we couldn’t get back in the end zone (until late in the game).”

The Stampeders scored two touchdowns in the second quarter to take a 17-10 halftime lead and added three second-half field goals and a 79-yard interception-return TD in the fourth quarter to take control of the game.

“Whether it was Calgary or Toronto, it’s the same thing to me,” Unamba said. “A loss is a loss. We lost and I don’t like losing.”

Backup quarterback Logan Kilgore, who replaced an injured Harris (upper body) 67 seconds into the second quarter, scored the first touchdown of his five-year CFL career on a one-yard plunge on second down with 4-1/2 minutes left in the game while Sean Whyte boosted his league-leading points total to 132 with two converts and a 10-yard field goal.

“It’s tough, but every team in the league has dealt with it this year,” Maas said about losing his starting QB to an injury. “There are no excuses. Logan was prepared to play. He went out there and did some great things. Some other things he’ll learn from.”

Harris (three of five passing for nine yards) was in and out of the locker room a couple of times early in the game before finally being pulled off the field.

Maas pointed out that the Eskimos took some bad penalties (10 for 103 yards) again.

“Ultimately, you’d like your penalties to be zero or at least, at the end of the day, yardage-wise not to be the big ones and, right now, they are. That is concerning.”

The Eskimos had a couple of early interceptions from Unamba (first of the season) and cornerback Josh Johnson (second) plus Monshadrik (Money) Hunter’s second pick this year in the fourth quarter.

“We got interceptions,” Unamba said. “We limited them in the rushing game. We knew from the first game that it was going to be a physical game, an intense game, that we had to stop the run or they were going to keep pounding us. I feel like we did that.”

The Eskimos held the Stampeders to only 29 rushing yards on 13 carries after giving up 201 rushing yards in the Labour Day Classic five days earlier.

“We let a couple of pass plays out, but for the most part, I felt we did a decent job,” Unamba said. “We probably gave up a couple of touchdowns at the wrong time and things just happened out there.”

Unamba (four defensive tackles) was covering Calgary receiver Reggie Begelton when he caught a 25-yard touchdown pass 41 seconds into the second quarter. It was Begelton’s sixth major in the last three games.

“I had a chance to knock it away,” Unamba said. “I’m inside leverage man-to-man on that play. He ran away from me on an out route. I had to close the space. I made it a tight window and tried to get my hand in there, but he made a good catch and rolled his body out. When we went to the ground, I had my hand on it and tried to rake it out. I thought it was going to hit the ground, but he held on to it kind of firm.

“At that point in the game, it was 7-10 and we just had to keep battling. It was a defensive battle. That was right after a penalty (for pass interference), as well, so we have to limit stuff like that. When you give a good team extra chances to stay on the field and have extra plays on offence, things like that happen.”

The Eskimos also gave the Calgary offence an extra opportunity late in the second quarter when punter Rob Maver completed a third-and-three pass to running back Ante Milanovic-Litre for a 25-yard gain off a fake punt.

“When it’s in a game like that and it’s in the heat of the moment like that, all the pieces to the puzzle matter,” Unamba said. “Special teams is a part of it, too.

“They made some big plays at the right time.”

Matt O’Donnell, the six-foot-11, 350-pound offensive lineman playing in his eighth CFL season, had a rare chance to run with the football after Kilgore fumbled because of a strip-sack early in the fourth quarter.

“I knew I had to get a couple of yards there after the sack,” O’Donnell said. “The ball just kind of bounced up perfectly. I thought I’d just grab it, tuck it away, scan for Stampeders, get as much (yards) as I could, two hands over the ball, lay someone out and fall forward.”

“A couple of years ago, I picked up a fumble they waved down,” he recalled. “I wasn’t sure if it was 2014 or ’15. (QB) Mike Reilly supposedly fumbled on the two-yard line. I picked it up and ran it in, but the refs marked him down. That was probably my closest call to a carry until now.” 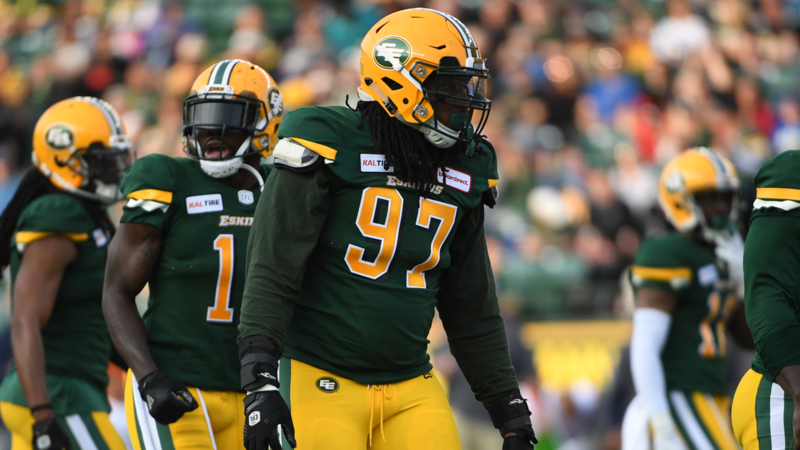 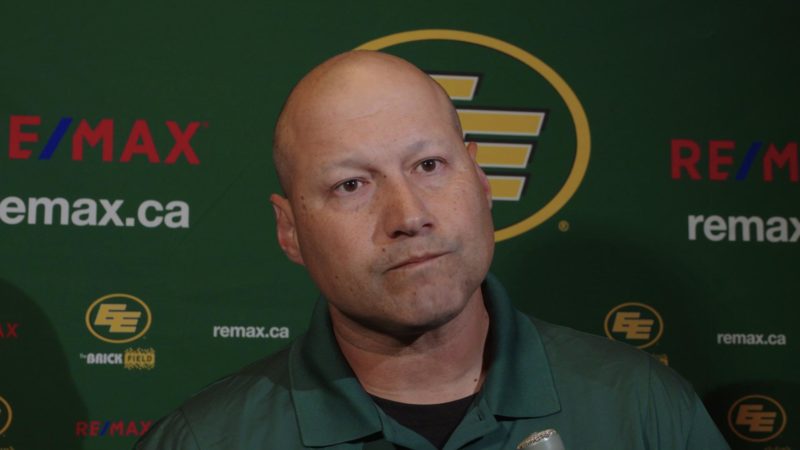