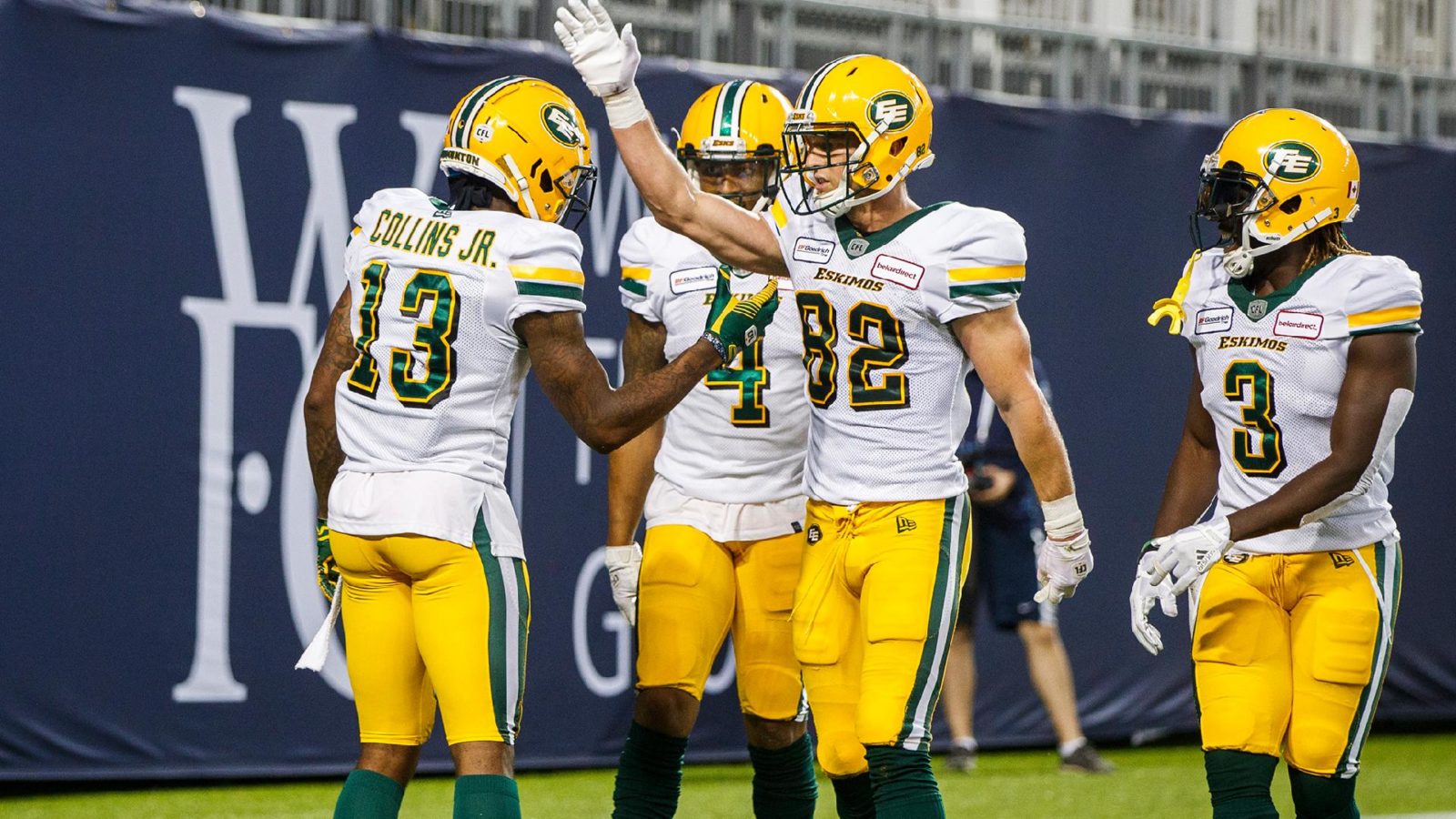 Quarterback Trevor Harris was “super frustrated” after last week’s victory over the Ottawa RedBlacks because he believes the Eskimos offence could be “scary good.”

The Eskimos started tapping into that potential Friday night by revealing a killer instinct against the Toronto Argonauts.

Harris passed for 420 yards and three touchdowns and rushed for two more himself as the Eskimos scored a season-high 41 points to sink the Argos 41-26 for a rare road victory in front of 16,490 spectators at BMO Field.

“In the first half, we scored touchdowns in the Red Zone, and they kicked field goals,” Eskimos Head Coach Jason Maas said on the 630 CHED post-game show. “That was the difference. They had some good opportunities, and our defence held them.

“We just talked all week about taking one play at a time, but finishing that play and not worrying about anything else,” Maas added about the improvement in the offence. “I thought we did that tonight.

“Offensively, that was probably our best performance throughout four quarters. We finished drives early and late, but we still aren’t satisfied. There were a couple of key mistakes – one being on the third-and-one where we take a penalty after a time out. That just can’t happen. We would have made it a three-score game late in the game.

“Fortunately, for us, our defence played well down the stretch and got the ball back so we could run (the clock) out.”

It was Edmonton’s first win in Toronto since 2016 and second in five games on the road this year. It also ended a stretch of results where wins and losses were alternated.

With the victory, the Eskimos improve to 6-3 to set up a showdown for first place in the West Division with the 7-2 Winnipeg Blue Bombers at 7 p.m. Friday at The Brick Field at Commonwealth Stadium.

The Eskimos, who had scored only 70 points over their previous four games, came up with a solution Friday for their previous struggles inside the opponent’s 20-yard line by scoring TDs on each of their first three possessions for the first time since 2003 and on five of seven trips overall into the Red Zone. It easily could have been six of seven were it not for a procedure penalty for an illegal formation (no end) that nullified running back CJ Gable’s one-yard run into the end zone early in the fourth quarter.

The Green-and-Gold also solved last week’s issue with their short-yardage plays, converting all eight Friday into first downs or touchdowns, including six by Harris (two on one-yard plunges for TDs) and four on third down despite the loss of left offensive tackle Tommie Draheim early in the game.

Wide receiver Greg Ellingson delivered a huge performance for the Eskimos, catching 10 passes for 170 yards and two TDs, including a highlight-reel diving catch at the back of the end zone to lift Edmonton back into a 12-point lead in the third quarter.

“It was a little bit out there, but (Harris is) obviously trying to get (the ball) away from the defenders and put it in the open spot,” said Ellingson, who has four touchdowns this year. “Put the effort out there and hoped I’d come down with the ball, jumped out for it and made the grab.”

DaVaris Daniels also had a big game with five catches for 155 yards, including bombs of 59 and 57 yards down the sideline to set up a touchdown and the first of Sean Whyte’s two field goals (15 and 13 yards) while Gable ran 15 times for 76 yards and basically helped the Esks kill the final two minutes and 20 seconds of the game.

Gable is second in the league’s rushing derby with 667 yards, trailing only Winnipeg’s Andrew Harris (819).

Meanwhile, league-leading receiver Ricky Collins, Jr., (741 yards) had eight catches for 71 yards to pass his previous career high of 720 yards and also scored his third TD of the season.

As a result, the Eskimos had 508 yards of net offence – the most they’ve managed since racking up 607 yards in the season opener.

Harris, who has had 20 or more completions in each of his last 22 games to move within two games of Ricky Ray’s CFL record, completed 28 of 41 throws for his second 400-yard performance of the season. He leads the league with 3,051 yards and is on pace to pass for more than 6,000 yards – an Eskimos record.

Harris, who has been sacked only three times this year, has also surrendered just two interceptions on 361 tosses. His current streak is 169 passes without a pick.

The Eskimos’ shutout streak of 64:15 against the Argos going into the game ended quickly. Toronto scored a field goal on its first possession only 5:17 into the game.

Even though the Edmonton defence allowed its most points over the last six contests, it still delivered another strong outing. The Eskimos stalled Argonauts drives at the Edmonton 14-, 35-, 13- and 25-yard lines in the first half, with quarterback sacks by Almondo Sewell (fifth) and Kwaku Boateng (fifth) pushing the Double Blue back from the eight-yard line on two occasions.

And while the Argos scored two touchdowns in the second half, they were also forced into two-and-outs on their other four series during the last two quarters.

“Our defence is tough down there to play against,” Maas said about the defence’s resolve when the opponent has the ball deep in Edmonton territory. “They’re the type of group that doesn’t want to give up anything.

“When a team has driven on them, they certainly don’t want to give up seven points. Their mindset is always to get a stop, and they did that tonight early, and that gave us momentum going into the second half, and then we just sealed the deal.”

Edmonton finished the game by controlling the football for 11:43 of the final 15 minutes.

“That’s huge!” Maas said when informed of the lopsided possession total in the fourth quarter.

Nick Usher (fourth) and Jesse Joseph (third) also had quarterback sacks. Mike Moore, who leads the team with six sacks, lost a potential sack when he was assessed one of the team’s three roughing the passer penalties. The Eskimos had only six penalties for 53 yards, overall.

Kyle Saxelid, a 2019 second-round draft pick who has been a backup on the offensive line for most of the season, replaced Draheim at left tackle after the veteran was injured.

Maas moved into a tie with Neill Armstrong for ninth place on the Eskimos’ all-time coaching list with 37 wins.

Statement on the Name