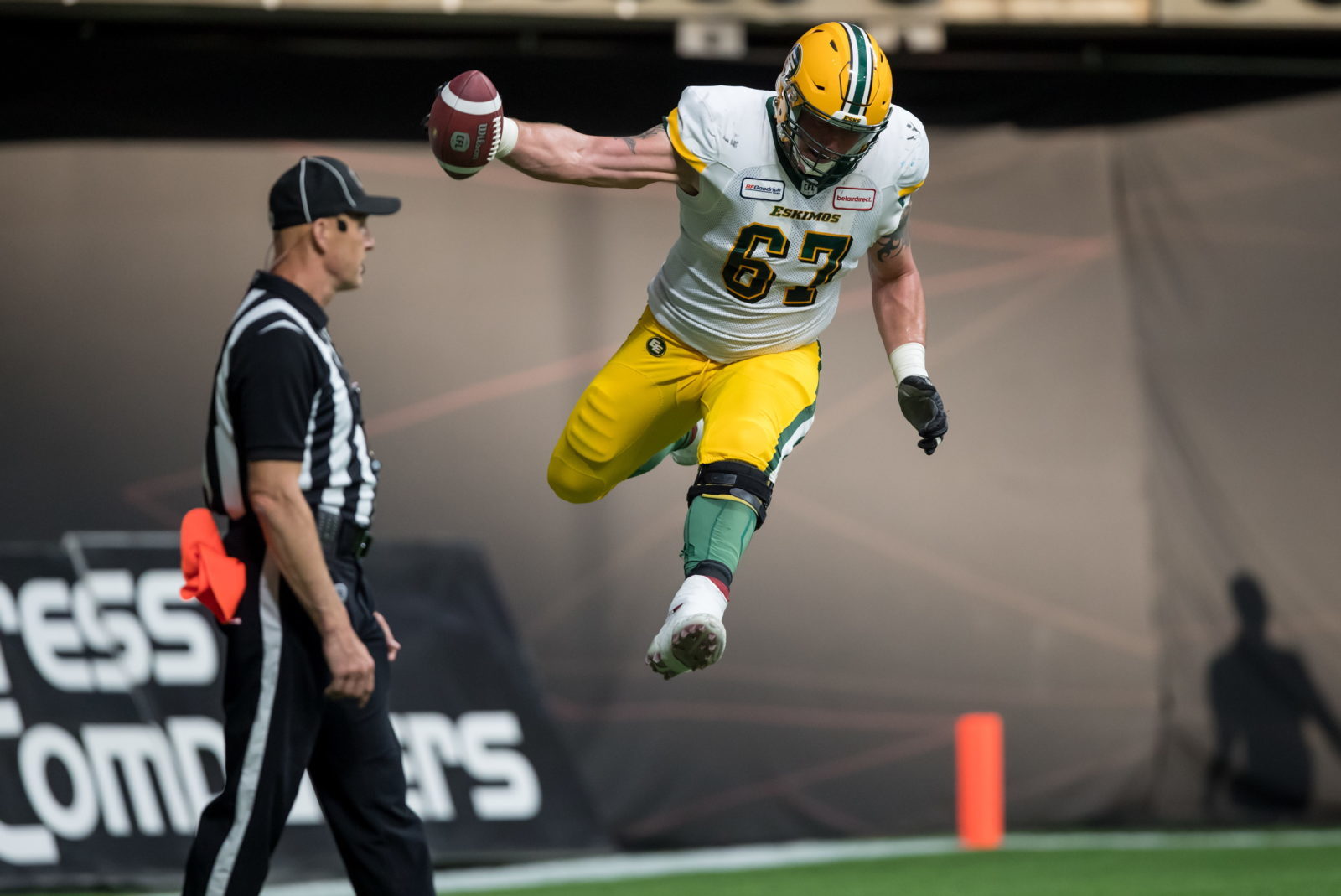 As he ran towards the end zone on the longest scoring play of his six-year CFL career, Natey Adjei started to worry that it was still too far away.

“It worked out,” he added. “Guys made some great blocks for me, and I was able to score, and there was no better feeling than that.”

Adjei, who usually plays in the shadows of the Eskimos’ other receivers, scored a 77-yard pass-and-run touchdown off a screen pass early in the third quarter to give the Eskimos a big boost en route to a 33-6 victory over the Lions at BC Place.

Edmonton, 3-1, clinched the season series with their second win over the Lions, 1-4, in three weeks. The Esks will receive the higher placement in the standings should the teams finished the regular season tied with identical records.

The Eskimos held a 16-3 lead after the first half but settled for Sean Whyte field goals of 31, 36 and 47 yards on three of their four scoring drives in the first half. Quarterback Trevor Harris also scored on a one-yard touchdown plunge in the first quarter.

Adjei, 29, said the Eskimos put an emphasis on getting the ball into the end zone in the second half to get some separation from the Lions after scoring seven field goals and no touchdowns in their previous game. They started out by using six receivers for the first time this season, then called the newly designed screen pass to Adjei on the second play only 75 seconds into the third quarter.

“We didn’t really practice it, but we talked about it a lot,” said Adjei, who finished the game with four catches for 106 yards (including 93 yards after the catch) for the first 100-yard performance of his career.

“I’ve never really seen it out of a 4×2 set (four receivers to one side, two to the other), throwing a screen with the linemen getting out for that type of screen,” Head Coach Jason Maas said about the play. “We just designed it and gave Natey some coaching points to go with it, and he was perfect on the play, and our O-line got out in space and blocked well. The rest Natey made happen, and the receiver blocking made happen.”

Adjei, who had 11 catches for 100 yards during the first three games of the season, made several players miss tackles during his big run.

“We know what we have in Natey, and we’re excited any time he does something well like that, but we’re not surprised,” said Maas, who pointed out that the Eskimos appreciate Adjei’s “blocking ability, his catch radius, his route-running.”

“He’s quietly become a go-to guy when we need him,” Maas added.

Adjei celebrated the third touchdown of his career by tucking the football under his jersey.

“My wife (Melody) is pregnant,” he said. “She’s actually due next month. It was just a little salute for her.”

The Eskimos followed up their seven-sack performance in the first BC game with five more on Thursday. Defensive tackle Mike Moore (third of the season) got the first one on the second play of the game, then safety Jordan Hoover (first), defensive lineman Jesse Joseph (second), defensive halfback Forrest Hightower (first) and defensive end Kwaku Boateng (second) all brought down Lions quarterback Mike Reilly in the second quarter.

“My goodness,” Adjei said. “Every time they’d sack him or get pressure, I’d turn over to DaVaris (Daniels) and say, ‘Man, I would hate to play against that defence.’ But wait, we do it in practice all the time, but they’re not like this against us. They can’t hit us.

“It looks ferocious,’ Adjei continued. “It looks vicious. It looks mean. I don’t know what is going on, but they’re a nasty bunch of guys. I’m happy they’re on our side.”

Joseph also forced a fumble during his sack, with linebacker Vontae Diggs collecting his first of two fumble recoveries in the game. Hightower, who had three defensive tackles, also caught his first interception of the season and knocked down a pass.

“We could have dialled up the pressure probably a little bit more (in the second half), but with the lead, trying to make them earn some things, we didn’t really want to keep doing it,” Maas said. “It was good to do it early, get a lead on them and then make them put together a lot of great plays to beat you, and they weren’t capable of doing that because of the guys up front (defensive line) and the secondary the way they were playing.”

Eskimos fans were probably holding their breath after Harris took a low hit around the knee from former Edmonton defensive end Odell Willis in the last minute of the first half.

“My knee didn’t bend the correct way, and it just gave me some pain,” said Harris, who was told to stay down on the field even though he wanted to get up and stay in the game.

He was then taken to the Eskimos locker room to evaluate the injury.

“Let’s just do whatever you need to do to brace it up,” he told the medical staff. “I wanted to go back out there.”

The Eskimos actually called the first play of the second half with the intention of backup quarterback Logan Kilgore running the play. But Harris “miraculously,” according to Maas, ran straight from the locker room into the huddle at the last second.

“I was doing a couple of things during the second half to protect where my knee is painful right now,” Harris said. “We’ll get an image (magnetic resonance imaging or MRI) on it and go from there.”

Harris (22 of 28 passing for 276 yards) also threw a 28-yard touchdown pass to Daniels in the third quarter as the Eskimos put the game out of reach.

“He’s obviously a prime-time player,” Harris said about Daniels, a fourth-year CFL veteran making his Eskimos debut in the game.

“His training camp was slow because of his injury and just the fact he was learning a new system and all that, but since he’s been back and he’s been healthy, and he’s been practising hard, it’s been exciting to watch him get involved in our offence,” Maas said about Daniels (four catches for 53 yards). “We weren’t surprised at all that he was able to make those plays tonight, and he made some big ones. That touchdown was great – the catch was phenomenal – but he made some other plays in that game that were just as valuable to us.”

Even though the Eskimos had to rely upon Whyte to kick four field goals (he also had a 45-yarder in the fourth quarter), Harris felt the offence “played a solid game” with “a lot of scoring drives.”

“We’ll get our points in bunches and make sure that we go on runs, protect the football and do everything that we can to make sure that we’re putting our defence in a good position, too,” he said. “Staying on the football field, so we’re not just two-and-out is something we’re priding ourselves in, as well as (no) turnovers and (few) penalties.

“There’s a few drives where we were a little ticked off that you don’t finish the drive,” he admitted. “We’ll rectify those things – it’s still early in the year – but I like the pieces on this team, and I like us.”

Maas didn’t like the Willis hit on Harris, though.

“You launch yourself in someone’s knee, that is not healthy for anybody,” Maas said. “If a quarterback doesn’t get that protection, you’re going to see a lot of quarterbacks get hit in the knee then. I don’t think everyone knew you could hit someone in a kneecap and get away with it (as in no penalty called).”

In this case, the referee actually called a roughing the passer penalty on the field but the CFL Command Centre in Toronto over-ruled the call.

“It’s unfortunate, but they must have seen a different angle,” Maas said about the Command Centre. “If that’s the case, you’ve got to live with it. But if it’s not the case, then you always err with protecting the quarterback.”

· Whyte has now made 14 three-pointers in a row since missing his first kick of the season. He has also made 28 of his last 29 field goal attempts dating back to last season.

· With his 15-point outing, Whyte passed former Montreal Alouette kicker Don Sweet to move into sole possession of 18th place on the CFL’s all-time scoring list with 1,349 points. He also took over fourth place on the Eskimos’ all-time convert list at 129.

· Wide receiver Kenny Stafford had only one catch for seven yards, but it was enough to push him over the 2,000-yard mark during his four-year career as an Eskimo.

· The Eskimos next game is at 2 p.m. on Saturday, July 20, against the Alouettes at Montreal.