Fullback Important Role, Even If They Toil In Obscurity

Fullback Important Role, Even If They Toil In Obscurity

Quick question: How many fullbacks on the Eskimos roster can you name?

If you haven’t heard of McCarty by now, you’re not much of an Eskimos fan.

But don’t be too hard on yourself if you didn’t know the following names: Pascal Lochard, Alex Dupuis, Tanner Green and Christophe Normand.

Most CFL fullbacks are glorified, offensive linemen. They spend most of their time making blocks to spring the running back for a big gain or to protect the quarterback from an aggressive defensive player. They toil mostly in anonymity unless they blow a coverage, then the cloak of invisibility disappears.

“I enjoy playing fullback; I love it,” said McCarty, 33, who was converted to a fullback in his rookie season and scored his first CFL touchdown as a fullback.

“It was definitely different, but I wouldn’t say it was a disappointment going from carrying the ball to being asked to block,” he said. “It’s just playing football. You’re still playing, so for me, (all of the positions) are important.”

McCarty had a 1,000-yard season (490 yards rushing, 583 yards receiving) in his second year with the Eskimos in 2008, but his number of touches dropped from 158 that season to 87, 98 and 74 the next three years. That was reduced even more significantly starting in 2012, with his 36 touches last year being the most in the last six seasons. He has five catches for 37 yards this year.

“Even a big block to help score a touchdown means just as much to me as running the ball in myself,” said McCarty, who did just that to help rookie running back Jordan Robinson score his first CFL touchdown recently against the Toronto Argonauts. 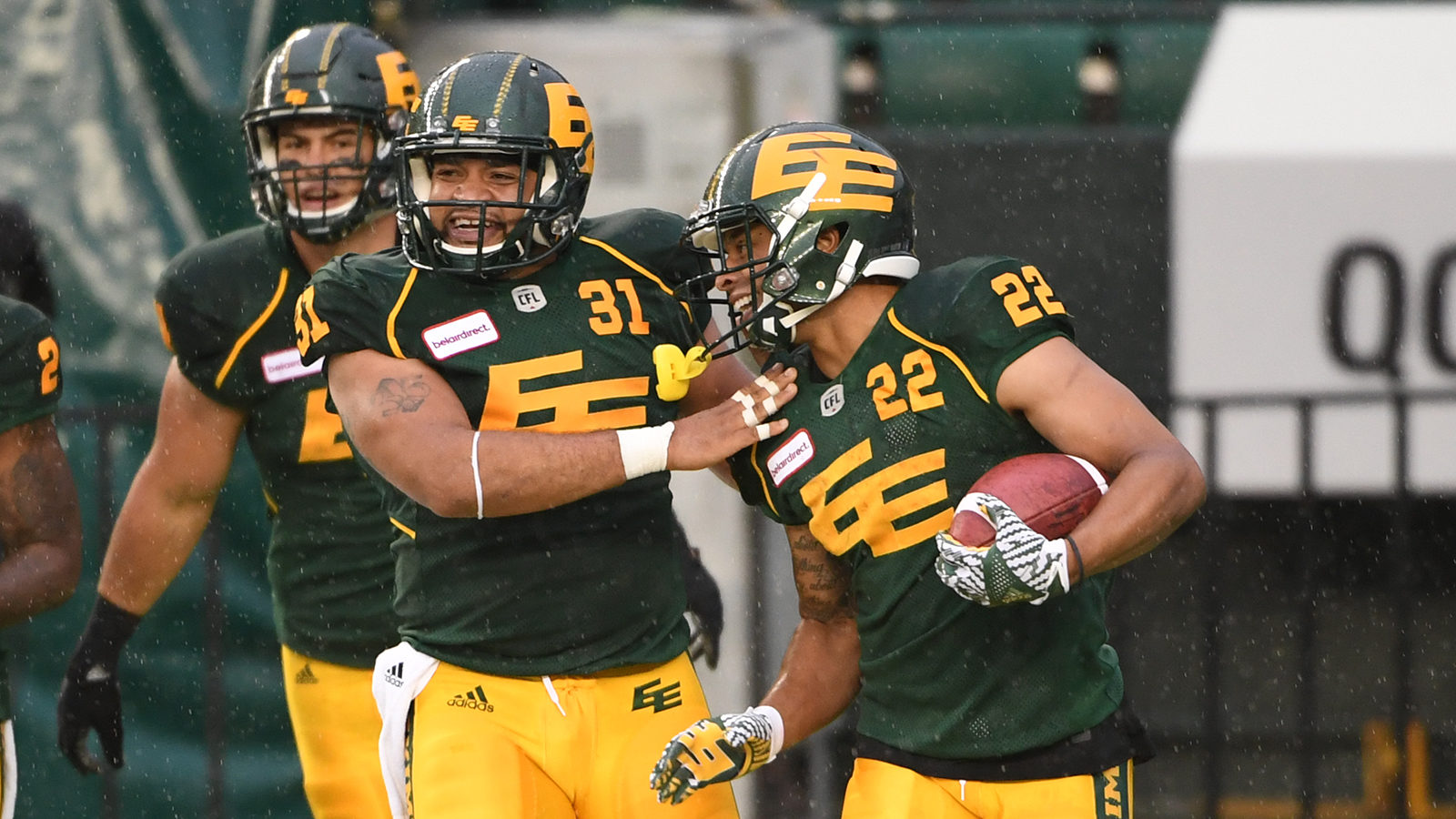 “I just wanted to be a football player more than be a certain football position. If they ask me to do more, that’s kind of what it is – special teams, block, run, pass, catch. Well, maybe not pass, but I would if they want me to.”

Thanks for the offer Calvin, but the Eskimos are probably covered at quarterback with Mike Reilly throwing passes.

McCarty learned how to play fullback from former Eskimo Mathieu Bertrand, who wore Green and Gold for nine seasons from 2004 to 2012.

He also mentioned Mike Maurer and Mike Bradley as other veterans who helped his transition to fullback and understanding that the more versatile you are, the more plays or positions you can master, the more valuable you become.

That includes playing on special teams, where McCarty is on the kickoff, kickoff return and punt teams and a backup on punt return.

Now he’s trying to pass on all the knowledge he gained to the next wave of Eskimos fullbacks.

“We have a lot of good guys, guys who do different things,” McCarty said. “We’ve got a good group – Dupuis, Pascal, Normand, Greener is a nice young up-and-comer. He shows some nice skills.

“But, at the same time, I still feel like that’s my position and I feel good,” he added. “You don’t look at all-stars or anything like that, but I don’t pop in the film (mistakes being pointed out while review game video during team meetings). You still go out there and make plays.”

McCarty was at 174 games played before the July 26 contest with the Montreal Alouettes. Former defensive end Leroy Blugh sits in 10th place on the Eskimos all-time games played list at 185.

“You’re still in the pit, so it’s kind of hard to look at it from that perspective,” McCarty said, “but I know from seeing alumni and talking to some of the greats who have come through, it’s a humbling feeling to hear that comment. 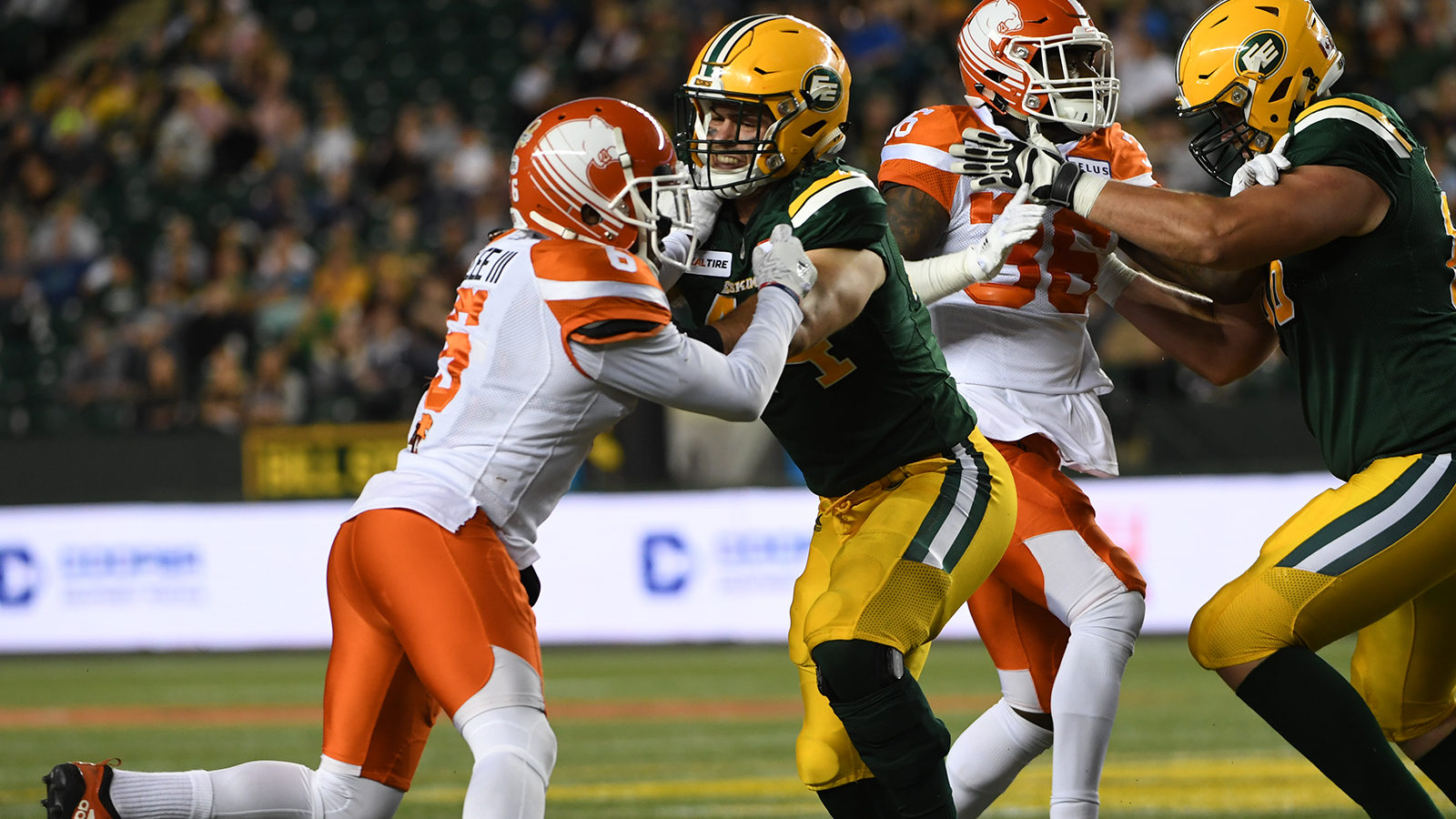 Dupuis, who is in his second season with the Eskimos, received some notoriety when he was penalized twice in the first game of the recent home-and-home series with the Toronto Argonauts. The six-foot-three, 243-pound native of Montreal, was flagged for holding (nullifying an eight-yard C.J. Gable touchdown run in the second quarter) and roughness (the 15-yard penalty pushed the Eskimos back to a second-and-21 situation in the fourth quarter).

“You don’t play a lot of plays as a fullback. You play probably half the snaps (30 of the roughly 60 offensive plays in a game) plus special teams, so you don’t want to have penalties because you don’t want to be a liability or someone who (coaches) are scared to put in because you’re going to get a penalty.

“That’s something (former Argos head coach) Scott Milanovich in Toronto really emphasized with me,” he continued. “He even told me once, ‘If you get another penalty, we’re not playing you next week.’

“Since then, I’ve never wanted to get a penalty, so I focus on technique all the time.”

If a penalty happens, however, Dupuis said he tries to block it from his mind.

“You keep doing your job,” he said. “My main focus was just to not think about it and keep playing because, otherwise, you’re going to make mistakes that may be even more costly to your team.

“If you don’t block like you usually block, you might miss a block and get somebody hurt, so you just keep playing, don’t think about the penalty and make sure when you’re in the film room, you correct it, you correct your technique and make sure  that it’s great for the next time, so you don’t get a penalty.”

Unlike McCarty, Dupuis was already a blocking fullback when he played with the University of Montreal Carabins. Drafted by the Argos in 2014, he had more statistics (six catches for 96 yards) in his rookie CFL season than he did during his entire college career.

Dupuis said he has never dropped a pass during his five-year pro career. He has 24 catches for 255 yards, including one reception for 12 yards this season.

“Whenever I get a chance to touch the ball, I catch it,” he said. “I take a lot of pride in that, so I keep working on that and make sure that my hands are ready whenever they ask me to catch a ball.

“But I know that’s not my primary role as a fullback. The reason why I’ve been in the league for five years is that I’m good at blocking so I focus on my blocking and make sure that’s great.”

A member of the punt, punt return and kickoff return teams, he had four special teams tackles in 16 games last year and one in the first five games this season. 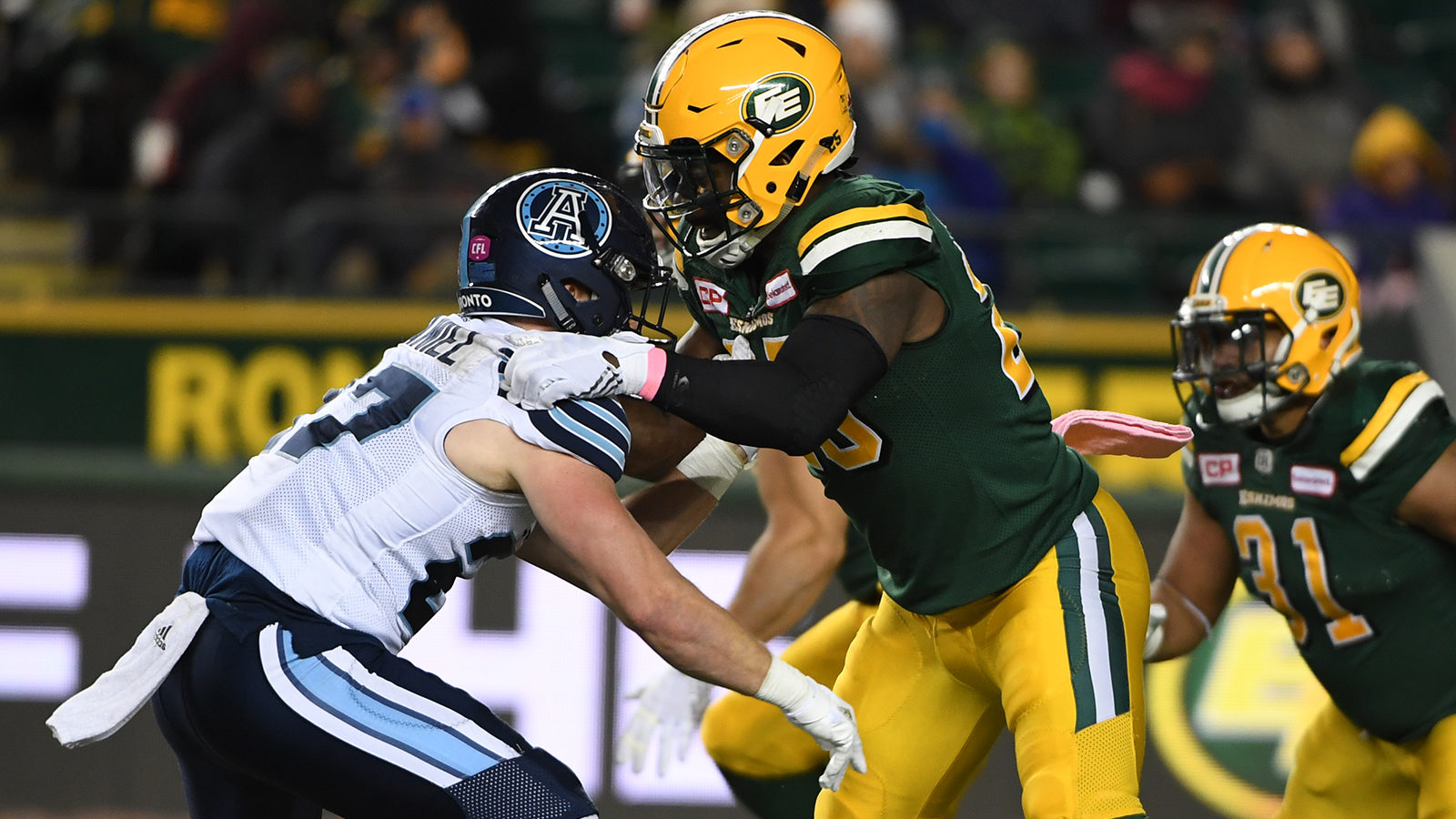 Lochard, 27, is a product of Laval University, where Bertrand now coaches the running backs.

“He was a good fullback here, and he’s a great coach, too,” said Lochard, who was joined by former Laval running backs Normand and undrafted rookie Chris Amoah during the Eskimos training camp this year.

Amoah was released after training camp while Normand is currently on the six-game injured list after playing the first three games.

Lochard, a Montreal native who stands six-feet and weighs 215 pounds, was the most valuable player (MVP) when Laval won the Vanier Cup in 2013.

“I played running back all my life, and then I got drafted (in the second round) by the B.C. Lions, and they switched me to the fullback position, which I did for two years,” he said.

He moved to the Winnipeg Blue Bombers in 2016 and served as a backup running back to current CFL rushing leader Andrew Harris, then came to Edmonton as a fullback last year only to play mostly tailback because of all the injuries at running back in 2017. He had 14 carries for 104 yards and one catch for five yards.

“I had a couple of good runs against Winnipeg here (five carries for 46 yards) and against Toronto (five carries for 27 yards) and blocked well on pass protection,” he said. “I’m kind of like a hybrid in the CFL right now. I’m mostly on special teams, and I’m learning to be a better blocker, but my first love is running with the ball and being a running back, of course.”

Lochard, who was released at the end of training camp and quickly re-signed the next day, is on all four of the Eskimos special teams.

“I’m really grateful and thankful that I’m still playing football,” he said. “Whatever they ask me to do, I’ll do it. Obviously, if they give me the ball, it’s more natural. I’ll run for the ball. If I have to do pass protection, it’s more natural.

“But if I have to play as a fullback, I’ll still do a good job.”

Lochard, who had 10 special teams tackles last year, has two in four games this season. He’s also used as the deep man on the wide side on kickoff returns (he had five returns for 76 yards last year).

“Sometimes they kick you the ball, but most of the time they kick it to the boundary (short-side) returner,” he said. “That’s fun, too, if I get to touch the ball and get a couple of returns.”

Meanwhile, Green, 25, is a fourth-round draft pick this year who made his CFL debut against the Argos on July 13 while Normand, 26, played three seasons with the Blue Bombers before signing with the Esks as a free agent during the off-season.