What’s in a number?

For a lot of football players, it’s a prefix before their name, a part of their personal identity. When introduced in a stadium full of fans, they hear: “No. 13, Mike Reilly.”

Because the number can be such a big part of their careers – and even the rest of their lives – players grow attached to it, take great pride in it and feel comfortable wearing it on their back.

“It’s kind of a superstitious thing,” said Eskimos defensive halfback Forrest Hightower, who switched from No. 35 last season to No. 12 this year. “I kind of fell in love with it. I adapted it and I just feel a little bit better wearing No. 12. It just reminds me of myself in my younger days (in college) and just a lot of plays that I’ve made in that jersey number and things like that.”

Sometimes, it reminds a player of an important event in their life.

“I won a Grey Cup in it,” said Aaron Grymes, a defensive halfback who was on the Eskimos championship team in 2015 before leaving Edmonton for 1-1/2 seasons to try to make the NFL’s Philadelphia Eagles. “I’ve got a bunch of family with the jersey number (36) on it and everything. I definitely wanted to get it back.”

Grymes had to negotiate a deal with rookie cornerback Arjen Colquhoun, who was wearing No. 36 when Grymes rejoined the Esks last fall.

“I feel better that I have my number on,” said running back C.J. Gable, who switched to No. 2 this season. “It makes me complete now. This is a sign that I’ve got my number, I’ve got a place where they run the ball, it feels good.”

The Eskimos never give out No. 0, although Reilly wore it for one pre-season game in 2017 after former defensive back Larry Highbaugh passed away. Reilly shares a history of wearing No. 13 with Highbaugh, but gave up the number on that special occasion to honour the memory of the CFL Hall of Fame player.

“It felt weird not to wear 13, but it was well worth it to try to honour him in some small way,” Reilly said. “At the same time, I take a lot of pride in wearing 13 in how I wear it, but also knowing that somebody like Larry wore that number here. I try to play in a manner that he would be proud to watch, too.”

No. 98 (Rollie Miles) is retired by the Esks while other protected numbers are No. 1 (Warren Moon) and No. 21 (Don Warrington). Miles and Moon are both CFL Hall of Famers while Warrington was a Canadian fullback commonly recognized as a fierce competitor who was beloved in the locker room. Warrington played 10 seasons before suffering fatal injuries in a car accident nine days after winning his fourth Grey Cup in 1980.

A veteran player generally has seniority over a rookie if they both want the same number. Players might negotiate a deal with each other (sometimes involving money) to wear a certain number. And numbers are usually locked in for the season once the official roster is announced at the end of training camp.

Here are some of the Eskimos number stories:

Wore 11 and 12 as a youth, but shared No. 13 with future Eskimos defensive lineman Adam Braidwood during his redshirt year at Washington State in 2004, “which you can do because he was on defence and I was on offence.”

Reilly chose No. 13 at Washington State because Miami Dolphins quarterback Dan Marino was his favourite player when he was growing up and he considered it “a lucky number.”

“I’ve worn that ever since (through two different colleges, four NFL teams and two CFL clubs),” he said. “I’ve been 13 since I was 18 years old. It’s been good to me so far.”

When Reilly was trying out with the St. Louis Rams in 2009, he noticed that Arizona Cardinals QB Kurt Warner kept looking his way while they were both stretching on the field before a pre-season game. Initially puzzled, Reilly suddenly realized he was probably the first quarterback to wear No. 13 for the Rams since the Super Bowl MVP in January 2000 left the team after the 2003 season.

“I ran over to him and said: ‘I hope you don’t find any disrespect in me wearing it.’ He was like, ‘I’ve been following you man. I’m glad you’re wearing it. Just treat it right and good luck to you,’ ” Reilly recalled.

Reilly later had his Rams jersey on the wall at his house when some visitors noticed it and said, “Oh cool, Kurt Warner jersey.”

“I was like, ‘No.’ I had to flip it around so that Reilly was showing,” he said.

His jersey was No. 39 when he joined the Eskimos last fall, but it will be No. 2 this year. Gable started wearing the number in high school “because everybody wanted No. 1. I was like, ‘I’m getting No. 2 because I’m two times better than No. 1!’ ”

He started to like the number even more when running back Willis McGahee played with it at the University of Miami.

“He’s a big part of why I wear No. 2 because I liked his running style and everything,” said Gable, who couldn’t get the number when he joined the Hamilton Tiger-Cats in 2013 because defensive back Evan McCollough already had it.

He tried to change his number the following season, but Hamilton turned down his request because they were already selling his No. 32 Ticats jersey.

Was No. 7 in high school and college because “I just felt like the good players usually had single-digit numbers.” He also considered 7 a lucky number.

But Hazelton asked for No. 21 when he joined the Toronto Argonauts in 2015 because he always thought it was “a cool number” and he liked Georgia Tech star receiver Calvin Johnson and University of California receiver Keenan Allen.

“I thought it looked good on a bigger receiver so I fell in love with the number,” he said.

When he couldn’t get No. 21 in Edmonton, Hazelton opted for “the next coolest number available to me” – No. 15.

“I knew Ricky Ray wore it, but I didn’t know I was the first dude to wear it on offence since he was gone (in a December 2011 trade), so that caught me by surprise with a little bit of added pressure. It’s cool, though, man. I like 15. I think I’m doing OK in it so far. Just got to keep it up.”

Bazzie said No. 53 “meant something to me” after making a name for himself by delivering big hits in college and collecting 32 quarterback sacks with the B.C. Lions from 2014-17.

“I always wanted to wear it because I felt good in it,” he said.

But Bazzie didn’t bother to ask for the number upon signing as a free agent with the Eskimos in February out of respect for veteran long-snapper Ryan King, who has worn the number for seven years.

“He’s put in a lot of work in this organization,” Bazzie said. “He’s one of our good guys who keeps the team in line.”

So Bazzie chose 54, which he also wore during training camp with Arizona last year. Upon learning that future Hall of Famer Dwight Freeney had eight of his 125.5 career NFL quarterback sacks while wearing the number with the Cardinals in 2015, Bazzie realized that it was “a pass-rushing number, so I took pride in that.”

Wore his favourite number – 6 – in high school and college, but was given No. 36 when he signed with the Eskimos in 2013.

“I don’t think it’s a bad number. It still has the number 6 in it,” Grymes said. “Now I feel like it’s a part of me. I ended up making a name for myself with this so I love it now and I’m going to keep it for as long as I can.”

The number was also important to Colquhoun, who was given No. 36 at Michigan State, although he didn’t initially like it.

“By my senior year, I fell in love with the number and that’s why I just stuck with it,” he said. “Just having that love-hate for the number really proved how much I grew as a person.”

Colquhoun admitted it took a little time for him to accept that letting Grymes get his number back “was the right thing to do.”

“It was Grymes’ number and he won a Grey Cup in it,” Colquhoun said. “I knew in the end it would make everyone happy. You had a veteran guy coming back after trying his talent in the NFL. Probably the one thing he wants is his number back.

“I think I just grew another step when I changed to 17,” he continued. “I look good in it. I look a little faster … 36 is a little too big, it’s for the smaller guys, they like to say.”

Colquhoun wore No. 7 in high school because “it just felt good.” His current number just has an extra ‘1’ in it.

No. 7 also has been “a special number” for Stafford because he wore it in high school and college and when he first played with the Eskimos in 2015. His favourite Ohio State receiver, Ted Ginn Jr., was No. 7 from 2004-06. “Me being a Columbus kid and seeing him play football at the level he was playing made me fall in love with the number,” Stafford said.

Unfortunately, the number wasn’t available when Stafford played with the Montreal Alouettes in 2016, attended the Winnipeg Blue Bombers’ training camp in 2017 and returned to Edmonton last summer.

“I’m 8 now, one better than myself back in 2015,” he said. “I’m a better version. Plus, (former Los Angeles Lakers star basketball player) Kobe Bryant is my favourite player, so 8’s fitting me really good.”

Was a late signing in 2017, so there wasn’t much choice for numbers. He wore No. 10 in high school, but that wasn’t available in college so he opted for No. 12. He said 12 “gave me my own individuality” as a defensive back “because typically quarterbacks wear it.”

“I just really liked the number and I wanted to wear it here,” he said.

Wore No. 11 in college “because I could be No. 1 twice,” he joked. There’s no special significance to 87 for him, other than it’s the number he was assigned when he joined the Esks. 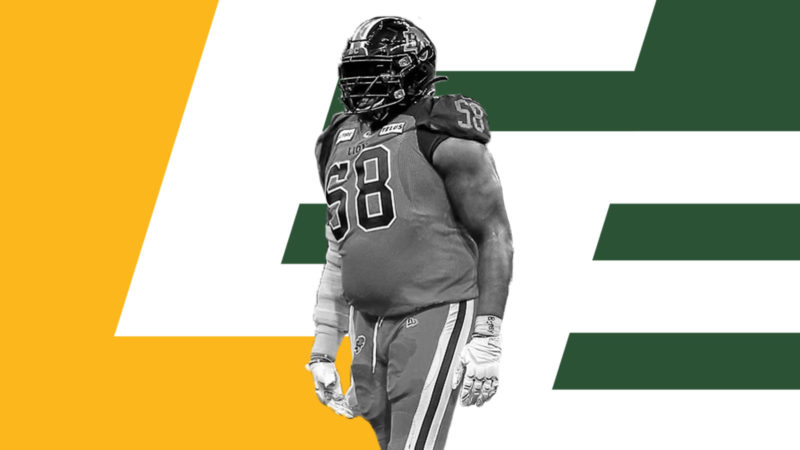 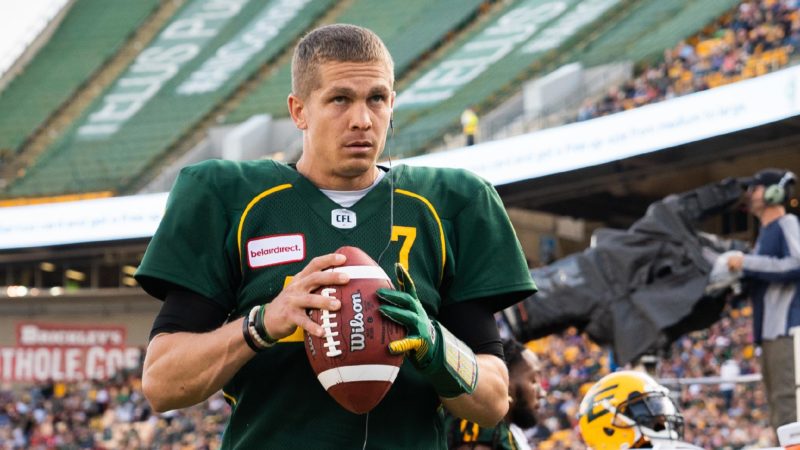 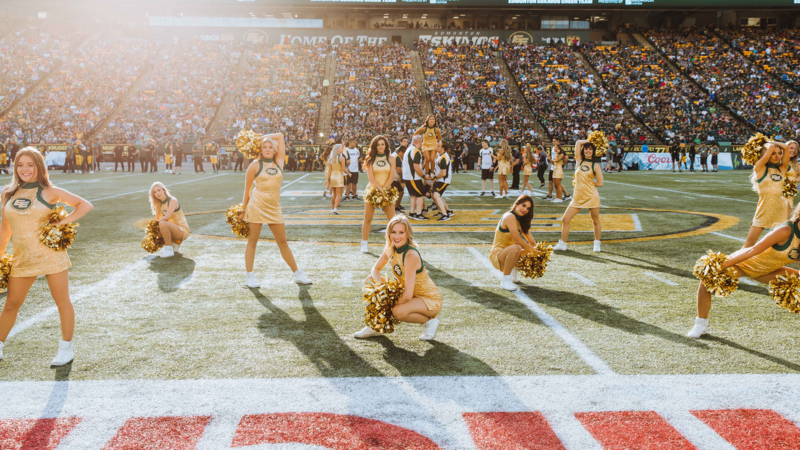