“Edmonton has shown me a lot of love” 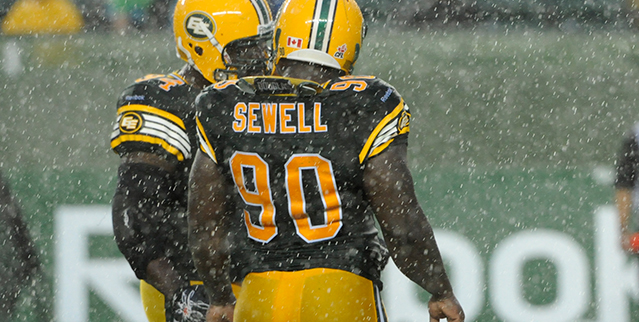 “Edmonton has shown me a lot of love”

After spending five seasons with the Edmonton Eskimos and the last three as a CFL all-star, Almondo Sewell figured it was time to try something completely different.

Instead of heading home to Akron, Ohio once the 2015 Grey Cup campaign ended, Sewell decided now was as good a time as any to put down roots in a place he now calls home.

Armed with a two-year contract extension he signed three days before Christmas, Sewell set himself on a mission to become part of the community in a city he’s played his entire pro career. And he’s tackled this off-season with the same vigor that he does as one of the most feared interior defensive linemen in the CFL.

When Sewell’s wife Natasha came to Edmonton during the 2015 season and landed a job here, it all started to make sense.

“It’s a great place to stay, a great place to live,” said Sewell. “They gave me and my wife opportunities that I wouldn’t be able to get back home. She found exactly the same job (financial consultant field) she was doing back home and it worked out pretty good.”

Sewell follows in the footsteps of many Eskimos players over the years who fell in love with Edmonton and decided to stay here in the off-season and even after their careers were over.

“It was a pretty easy decision for both me and her,” Sewell said. “One thing we’re sacrificing is we don’t get to see our families as much but you can’t stay in an environment you can’t succeed in just to be with family.

“Edmonton has shown me a lot of love when it came time to restructuring my contract and give me a deal I wanted. I thank the organization for doing that. They’re going to get what they paid for.”

With his football career now firmly entrenched due to his on-field excellence, Sewell set about connecting with the people players rarely get to see.

Sewell has made appearances at the car show, at an autograph session with Odell Willis and other events.

What he enjoys the most, though, is his work at the Stollery. Even though he’s yet to start a family, there’s something special about the time he spends there.

“I look forward to the Stollery and working with the little kids,” said Sewell. “When the Edmonton Huskies start camp, I’ll go down and help out there and with bantam football, I like doing that.”

Could his timing have been more perfect? With his off-field life in order and the decision to stay here this off-season, Sewell picked one of the mildest winters ever to ease into the Edmonton phase of his life.

“We don’t mind the cold,” Sewell said with a smile. “We’re from Ohio and we’re right from the snow belt … we’ve seen plenty of snow. It gets chilly cold here and there, but it’s not bad.”

Not to mention spending his first off-season in Edmonton as an important player on a Grey Cup champion team. That’s made this off-season extra-special and the Eskimos fans have shown their appreciation wherever he goes.

“You get a lot more recognition than you normally do – everybody loves a winner and nobody likes a loser,” said Sewell. “When you go around, you realize everybody knows everybody. It’s been great bringing a championship back in the city.”

In retrospect, staying in Edmonton this off-season has turned into one of the most rewarding times of his life.

“It works out pretty good,” said Sewell. “There’s nothing we regret about it. We’re still going to be living here as long as we can find things to do. She loves her job. I’m starting to transition to find something I can do here in the off-season. I plan on going back to school to take something like business administration.”

As a child, baseball was the first love for a kid who was born in Buff Bay, Jamaica. Every year during high school summer holiday, he’d travel to Puerto Rico to play summer ball.

Yet football opened doors for him that baseball could not.